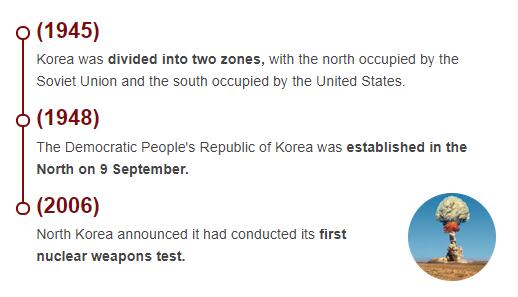 For the history of North Korea before 1948 see Korea (History).

Since North Korea under the name of the Democratic People’s Republic of Korea was proclaimed in Pyongyang on September 9, 1948 in response to the establishment of the Republic of Korea (South Korea) on August 15 of the same year, the division of the Korean peninsula was permanent. As early as October 1945, the Soviet occupation power had allowed Kim Il Sung to appear at a mass meeting in Pyongyang, and with Soviet assistance his position of power was quickly and effectively consolidated. In 1949 Kim was both Prime Minister and Chairman of the Communist Party Korean Workers’ Party and, in practice, also Commander-in-Chief of the North Korean Army, established in February 1948.

The work of creating a Stalinist-cut folk democracy was interrupted by the Korean War, which erupted in June 1950 through North Korea’s attack on South Korea over the 38th latitude. The loud rhetoric of war on the reunification of the motherland had been fierce on both sides of the border before the outbreak, but the military initiative was taken by North Korea after consultations between Kim Il Sung and Josef Stalin in March 1949. Despite the end of the war in 1953 following a massive Chinese military intervention. With the status quo, Kim Il Sung managed to strengthen his position during the latter part of the 1950s. by eliminating several strong opposition groups within the Communist Party. To see more information other than history, please visit Abbreviationfinder to learn more about climate, population, government, and economy for the country of North Korea.

Foreign policy Kim Il Sung implemented a skilful balancing act in connection with the Sino-Soviet conflict and finally achieved a kind of neutrality. Relations with South Korea have been more or less tense throughout the post-war period (see also the Korea issue). The official contact attempts that started with the so-called Red Cross talks in 1971 have produced rather meager results. North Korea’s refusal in 1993 to allow the IAEA to inspect nuclear facilities led for a time to political tensions on the Korean Peninsula, which were nonetheless resolved through an agreement between North Korea and the United States in 1994. Following Kim Il Sung’s resignation in July 1994, his son Kim Jong Il took power.

The country has been in a serious economic crisis since the early 1990s, triggered by the Soviet Union and China starting to demand hard currency payments. Previously, the trade had been conducted on favorable terms. North Korea could no longer pay for its imports of primarily oil, which had negative consequences for the entire economy. In addition, in 1995 the country was hit by natural disasters in the form of floods and droughts, which made it necessary to seek food assistance from the outside world. North Korea has established diplomatic relations with more and more countries after the turn of the century, including within the EU, and has made some limited attempts to reform the economy and open the country to the outside world. China is the country’s closest ally and trading partner.

In December 2011, Kim Jong Il passed away, after which his youngest son, Kim Jong Un, took over the role of the country’s dictator, formally through the leadership of the Korean Workers’ Party and the National Defense Committee. He has continued his representatives’ policies, which include investments in the country’s nuclear weapons and missile programs.

Nuclear weapons tests were carried out in February 2013, January 2016 and September 2016, which resulted in the UN Security Council adopting resolutions imposing stricter sanctions. Inter-Korean relations then became tense and South Korean President Moon Jae Ins’s attempt to establish contacts was met with cold hand. In addition, President Donald Trump’s tough policy has exacerbated long-standing relations with the United States. Another nuclear test was conducted in September 2017. The explosive force was then at least ten times as large as in the last nuclear test in 2016.

Kim Jong Un has continued the country’s isolationist policy and made no foreign visits. Chinese President Xi Jinping’s visit to South Korea alone in 2014 meant a breach of the previously held tradition that meant Chinese leaders first met North Korea’s leaders before meeting with South Korea’s head of government. China is North Korea’s most important ally, as well as the largest food and oil supplier, and has the most to fear about a possible collapse of the regime that could lead to large flows of refugees across the border.

In May 2016, for the first time since 1980, a party congress was held to consolidate Kim Jong Un’s power. Economically, there are few signs of reform, but since the crisis years in the 1990s, the informal economy has become increasingly important for the welfare of people and is therefore accepted by the government. The economy is said to be developing mainly in the capital Pyongyang, while the majority of the population lives in smaller cities or in rural areas under materially scarce conditions.

Kim Jong Un has, since taking office, executed a number of politicians with ties to the former government led by his father Kim Jong Il, which in 2013 was expressed in the execution of Kim Jong Un initiated by his uncle Jang Song Thaek (born 1946) who had great influence in the regime. In 2017, Kim Jong Un’s half brother Kim Jong Nam (born 1971) was also murdered at an airport in Kuala Lumpur.

In April 2018, Kim Jong Un and Moon Jae In met in a meeting that led to a joint statement to realize a nuclear-free Korea Peninsula and the Korean War to formally end in 2018.