Language and ceramic studies indicate that Palau, unlike eastern islands of Micronesia, was populated from the west, ie. from Indonesia and the Philippines, probably between 2000 and 1000 BC The ceramics exhibit an unbroken tradition into historical times. Other prehistoric materials include anthropomorphic (human-like) stone figurines and terraced hills with defense structures.

Towards the end of the prehistoric period, Palau belonged to an extensive tribute and trade network that had its political center at Yap, about 500 km to the northeast. Palau served, among other things. as a site of refraction for the large stone slabs (vai) used at Yap as status symbols into historical times. 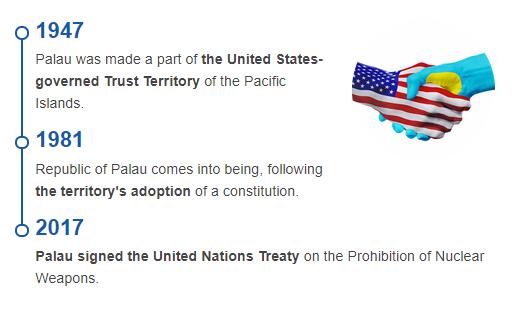 The islands were under Spain’s sphere of influence from the 16th century, but were not annexed until 1886. Spain sold Palau to Germany in 1899, which in turn lost the area to Japan in 1914. An extensive immigration of Japanese people followed. The islands were taken in by the United States in 1944, which from 1947 administered them under UN supervision.

Palau became an autonomous republic with elected president and two-chamber parliament in 1981 and in 1982 signed an agreement on free association with the United States. However, the agreement was rejected in seven referendums, when the constitution demanded a 75 percent majority to lift a ban on the storage of nuclear weapons. After a reduction of the requirement for a qualified majority, the agreement was approved in an eighth vote in 1993.

Palau became an independent state on October 1, 1994 with the Japanese-run Kuniwo Nakamura (born 1943) as president. To see more information other than history, please visit Abbreviationfinder to learn more about climate, population, government, and economy for the country of Palau. The agreement, which recognizes Palau’s almost complete internal and external autonomy, binds the country to conduct a foreign policy that does not conflict with US interests. The United States also remains responsible for Palau’s defense for 50 years to come.

History of Palau
Tagged on: Palau