The modern state of Papua New Guinea consists of the eastern half of the island of New Guinea and about 600 smaller islands. In New Guinea there are 50-60,000 year old archaeological traces of people. Until New Guinea was colonized by Europeans, there was no centralized state in the area.

The first Europeans came to the area in the 16th century. In 1884, the southeastern New Guinea became the protectorate of the United Kingdom and called British New Guinea. The same year, Germany annexed the northeast and called it Deutsch-New Guinea. Control of the colony was left to Deutsche Neuguinea-Kompagnie, which traded with copra (coconut) until the German Empire took direct control in 1899. In 1902, the British New Guinea colony was transferred to Commonwealth Australia and the name changed to Territory of Papua.

During World War I, Australian forces overpowered the Germans of New Britain and German New Guinea was controlled by Australia for the next few years. In 1920, Australia was formally mandated to govern German New Guinea by the League of Nations under the Treaty of Versailles. In 1946, the United Nations gave both the northeastern and southeastern parts of New Guinea to Australia as a protectorate under the name The Territory of Papua and New Guinea. In 1973 the name was changed to Papua New Guinea, and on September 16, 1975, the country became an independent state with Michael Thomas Somare as prime minister. To see more information other than history, please visit Abbreviationfinder to learn more about climate, population, government, and economy for the country of Papua New Guinea. 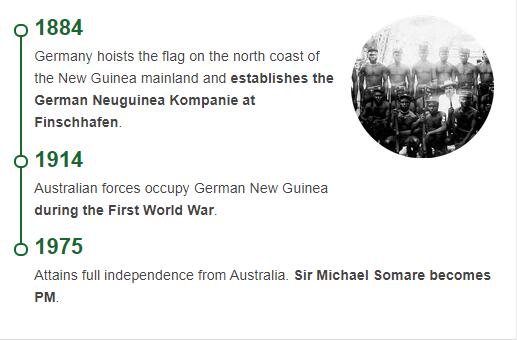 The island of New Guinea together with Australia is part of the Sahul landmass. In the Pleistocene period, the sea level was lower and the two islands interconnected as a continent before being separated by the Torres Strait about 10,000 years ago as the sea level rose. The first archaeological traces of human activity on the island are 50-60,000 years old. The people came from the west, from the territories of Wallacea and Sundaland (which today make up Indonesia and Malaysia) and the migration continued to Australia. The majority of the population of today’s Papua New Guinea speak Papuan languages, and it is believed that the Papuans originated from this first wave of migration to the country. Along the north coast and on the islands off, mainly Austronesian languages ​​are spoken, and the Austronesian migration to the area began approximately 3500 years ago.

Until New Guinea was colonized, there was no centralized state in the area. The population has traditionally been organized into more or less egalitarian groups with leaders who themselves mobilized support and linked alliances, to hierarchical systems with inherited leadership positions. The various groups have been linked by extensive trade networks, both along the coast and inland.

Portuguese seafarers came as the first Europeans in the 16th century, and New Guinea was drawn on a world map for the first time in 1569 (Mercator’s map). Several European seafarers found their way to the coast of New Guinea and the surrounding islands after this, but no major expeditions were made inland on the island until the late 1800s. In 1606, the Spaniard Luis Vaez de Torres sailed along the south coast of the island through the strait, which was given his name, proving that New Guinea was not related to Australia. He claimed in the area on behalf of the King of Spain, but it was left to the Netherlands and England after the peace in Utrecht in 1713. In 1616 the Dutch discoverers sailed Willem C. Schouten and Jacob LeMaire along the northern coast of New Guinea on their land crossing.

In 1884, Germany annexed the northern half of the present state. This past year, the southern part was proclaimed a British Protectorate and called British New Guinea. The Northern Territory was called Kaiser Wilhelm Land or Deutsch- New Guinea, and control of the colony was left to the Deutsche Neuguinea-Kompagnie until the German Empire took direct control in 1899. In 1902, the British New Guinea colony was transferred to the Commonwealth of Australia and the name changed to Territory of Papua..

In 1920, Australia was formally mandated to govern German New Guinea by the League of Nations under the Treaty of Versailles, the peace treaty after the First World War. From 1947, the area was the UN area under supervision, administered by Australia. During World War II, Japan invaded in 1942, but was again expelled by the Allies in 1943-1944. A joint Australian administration for the Northern and Southern Territories was established in 1949. Inner autonomy was introduced in 1973.

Relations with Indonesia have at times been tense. The government declared a state of crisis in 1994 after more than 9,000 refugees had crossed the border from the Indonesian province of Irian Jaya following fighting between insurgents and Indonesian security forces.

From 1988 to 1998, Papua New Guinea’s main problem was an armed uprising by separatists in Bougainville. Here are some of the world’s richest copper deposits, and about 40 percent of state revenue was linked to their exploitation. The country also came into conflict with the Solomon Islands, who were accused of supporting the Bougainville rebellion militarily. In March 1997, parts of the army made mutiny in protest that the government had recruited a group of mercenaries, mainly South Africans, against the rebels in Bougainville. Julius Chan had to resign as prime minister. Hundreds of Papua New Guinea soldiers and policemen were killed in fighting in Bougainville.

A ceasefire agreement in 1998 ended ten years of civil war. It was followed in 2001 by a peace agreement that gives Bougainville greatly expanded autonomy, as well as the promise that a referendum can be held in 10-15 years.. Here, the islanders should be able to choose whether they want full independence. The peace process has since yielded good results. The military forces have been disarmed and in 2005 the first election in Bougainville took place. A prominent figure during the war against the government in Papua New Guinea was Joseph Kabui, who also became a unifying figure for the island population during the negotiation process in 1998-2005. He now became the head of the first self-government that took office in 2005. Kabui died in 2008 of heart attack, aged 54. The civil war in Bougainville led to the loss of over 10,000 lives. The operation of one of the world’s largest copper mines, Panguna, was halted for a number of years.

In 1998, the northern coast of Papua New Guinea was hit by a tidal wave caused by an earthquake in the sea. Over 3000 people perished. The worst was the area around Aitape and the Sissano Lagoon in Sandaun Province.

In November 2000, the government announced that about 1,000 residents of the Duke of York Islands had to move because the water level was considered dangerously high due to climate change.

The 3320 residents of the Carteret archipelago, which belongs to the now autonomous Bougainville province, made a decision in 2008 to relocate to the island of Tinputz due to rising sea ​​levels. The Catholic Church has given 810 acres of land on Tinputz to the “climate refugees”. The relocation action has been considered since 2005. The Carteret Group comprises six small coral islands approximately 90 kilometers northwest of Bougainville. The islands have often been flooded in recent years. The islanders claim that within 15 years the Carteret Islands must be assumed to have become uninhabitable.

In the 2007 general election, the National Alliance became by far the largest party with 27 out of a total of 109 seats in parliament. Michael Somare became new prime minister and formed a coalition government with the support of 86 of the parliamentarians.

In 2011–2012, the country experienced a constitutional crisis after Somare was deposed as prime minister while on a long stay in a hospital in Singapore. The majority in parliament no longer had confidence in Somare, and on 2 August 2011 Peter O’Neill was replaced as prime minister. When Somare returned to Papua New Guinea later that year, the Supreme Court, by dissent, determined that the provision had been illegal and that he had to be reinstated. O’Neill refused three, and the country had two prime ministers for a period of time.

The conflict was resolved after the election in summer 2012. O’Neill’s party Peoples National Congress won, and Somare chose to support O’Neill as prime minister, just a few weeks after he publicly threatened to send O’Neill into prison.

Papua New Guinea has maintained strong links with the old colonial power Australia, which is the largest trading partner and aid provider. The situation was tense when Australia, in its own statement, in 2004, wanted to prevent terrorism by intervening in rising corruption and lawlessness, not least internationally organized crime in Papua New Guinea. After hard negotiations, the government of Papua New Guinea agreed to “invite” an Australian police force to combat violence and corruption. The Papuans saw the Australian intervention as degrading, and the Australians were criticized for neo-colonialism. Australians returned home less than a year after the Papua New Guinea Supreme Court found the deployment of foreign police unconstitutional. However, the relationship with Australia is still in a special position due to its geographical proximity and historical ties.

Papua New Guinea has been a member of the APEC regional cooperative since its inception in 1989. With assistance from Malaysia, the country’s first stock exchange was opened in Port Moresby in 1995. Papua New Guinea has in recent years placed greater emphasis on relations with other Asian countries simultaneously as relations with Australia deteriorated under the Howard government. Diplomatic and economic ties to China have been strengthened. China is now providing significant assistance and investment.

Papua New Guinea recognized Taiwan for a shorter period in 1999, and Taiwan has also been trying diplomatic moves ever since. In May 2008, Taiwan’s Foreign Minister James Huang and Deputy Prime Minister Chiou I-jen were made responsible for the loss of $ 30 million. The money was supposedly used to buy diplomatic recognition from Papua New Guinea, but ended up with scammers.