The oldest finds of stone implements are at least 30,000 years old and come from a settlement in the cave of Tabon on the island of Palawan. Later on, the Northern Islands find similarities with the Stone Age culture in Vietnam and in the Southern Islands similarities with Australia. During the younger Stone Age, however, local cultural groups develop that are clearly different from the mainland. Cultivation is known from about 3000 BC, while bronze comes into use only in the middle of the first millennium BC. and iron just before Kr.f. Archaeological finds of pottery from the first millennium AD suggests contact with southern China, while the connection to India, which played a major role in Indochina, is weak. 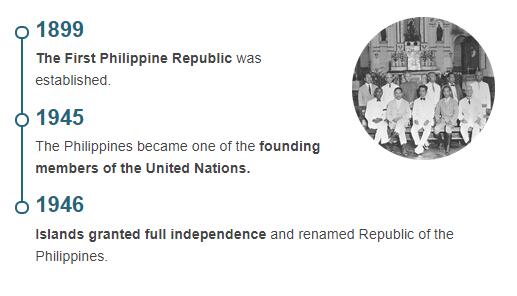 At the latest during the first millennium AD arose socially stratified chiefdom in the Philippine island world. The chieftaincy title was inherited within highly esteemed families who primarily built their power and wealth on control of agricultural production but also on land and sea raids to nearby areas. To see more information other than history, please visit Abbreviationfinder to learn more about climate, population, government, and economy for the country of Philippines.

From around the year 1000, the Philippines was increasingly integrated into the Asian distance trading networks, which helped to strengthen the rulers’ power and prestige. As in the rest of Southeast Asia, in the 15th century, several trade-based states or regional centers of power developed, including Manila, Cebu, Magindanao and Sulu. With trade, Islam also came to the island world, where it was established mainly in the southern parts.

The first Europeans arrived in 1521 under the leadership of Fernão de Magalhães. However, it was not until 1565 that the first permanent Spanish trading station was established in the Philippines; In 1571 Manila became the administrative center for the Spaniards. With the exception of the mainly Muslim southern islands, the entire archipelago gradually came to the end of the 17th century under Spanish supremacy. The colony was named after the Spanish king Philip II.

During the following centuries the position of the Spaniards was challenged by Portuguese, Dutch and English. Large parts of the southern Philippines also resisted the Spanish colonization and mission attempts, which led to a prolonged conflict, the so-called Moroccan War, which ended first with the Spanish conquest of Sulu in 1876. At the same time, the Spaniards made big gains in the triangle trade between Mexico, China and The Philippines, which lasted until 1815, when the Spanish monopoly was abolished.

The Spanish government was originally founded on the encomienda system, which gave individuals exclusive rights to tax different villages. Later, private property was introduced. Large parts of the country were Christianized. However, the Philippines continued to be characterized by strong local traditions and power groups, which still hold true today.

The first modern organized resistance to the Spaniards arose towards the end of the 19th century. In the leadership was the Spanish-educated domestic elite. The author and physician Jos谷 Rizal (1861-96) returned from Spain in 1892 and organized the Liga Filipina (‘Philippine League’), which called for reform. Rizal was executed for subversive activities in 1896, which became the start of the Philippine Revolution. Katipunan, a secret revolutionary society, rebelled and soon gained hundreds of thousands of followers. In 1897 Katipunan entered into a ceasefire with the Spaniards, who promised reforms. The rebel leaders went into exile in Hong Kong.

The intensified US-Philippine economic relations provided good sales for several Philippine crops in the United States, but overall did not contribute to the development of agriculture and industry. The biggest improvements were made in education and health care. In 1907 the first elections were held. They gave the Nationalist Party, which sought an independent republic, a leading position under the leadership of Sergio Osmeña and Manuel Quezon (1878-1944). The US influence was significant. Particularly strong were the ties between the Filipino elite and the United States, which many saw as an ideal and a protector. In 1934, a planned transition to full independence began, with the date set to 1946.

In 1941, Japan occupied the Philippines, where Manila in particular was greatly destroyed. In the countryside on the island of Luzon, resistance was led by the guerrilla movement Hukbalahap, which was under Communist leadership and sought to implement far-reaching social changes; among other things, the land was redistributed to the landless.

The Philippines was liberated in 1945 and gained its independence in 1946 but continued to be closely tied to the United States. The Americans gained special economic privileges, as well as access to military bases in the country. Hukbalahap’s continued activities in 1949 resulted in a revolt against the central power, which was defeated in 1953 with US support.

Ferdinand Marcos was elected president in 1965. He launched a more export-oriented economy. Political problems grew, and there were extensive student demonstrations. A new, Maoist-oriented, communist party was formed, which established its own army, the New People’s Army (‘New People’s Army’, NPA) and a broad political coalition, the National Democratic Front. In 1972, a state of emergency was introduced, which gave Marcos great powers of power. Some growth occurred during the 1970s, but the country nevertheless struggled with major economic problems. Growth was based on borrowing abroad.

The state of emergency was abolished in 1981. Marcos was re-elected for another six years after a campaign characterized by irregular methods and many boycotted the election. Opposition politician Benigno Aquino returned in 1983 after several years of exile in the United States but was assassinated upon his arrival at the airport. The political and economic crisis became acute. Marcos sought to strengthen his position by announcing a swift presidential election in February 1986. Aquino’s widow, Corazon Aquino, was running for a counter candidate. After the election, military leaders turned to the old president, who also lost his support from the United States. A popular uprising led him to flee the country within four days.

After Corazon Aquino became president, she tried to restore constitutional democracy. After many years of political repression and widespread corruption, her reign was initially welcomed. However, the basic societal problems remained. She did not come to terms with either the Muslim Mora movement on the island of Mindanao in the south or with the guerrilla movement New People’s Army, which operated in the provinces. The extensive external debt, financial tightening and privatization campaigns had created a deep dissatisfaction in many places. Social life was increasingly characterized by political violence, violation of democratic rights, and several military coup attempts took place. Demands were made to abolish the US military bases, which for many symbolized lack of Filipino sovereignty but at the same time provided a significant source of income; among other things, the bases created about 22,000 jobs. However, after a parliamentary decision, the United States abandoned the bases in 1992.

In 1992, Fidel Ramos was elected president. He had been Minister of Defense during Aquino’s reign and had a relatively good relationship with several groups in the military. The economy was stabilized through a series of reforms and showed a positive development during the period 1993-96. Political development was stabilized through an agreement with the Communist guerrilla and the moratorium in 1996. Local political co-influence increased, and corruption was limited.

However, a number of Christian tendencies emerged in 1997; the economy began to stagnate and the violence in society increased in the form of violent demonstrations and kidnappings. An Islamic faction of the moratorium did not accept the 1996 agreement, and the struggle continued with the intention of creating an independent Islamic state. Prior to the 1998 elections there was great concern; The opposition feared, among other things, that Ramos planned changes to the constitution. However, elections were held in May of that year, and populist presidential candidate Joseph Estrada promised improvements for the large number of poor people in the country. With the support of especially intellectuals and business representatives, he succeeded in being elected president. Estrada faced strong resistance from several directions, including the Catholic Church, and he was criticized for failing to fulfill the election promises to the poor population. In 2000, Estrada was subjected to increasingly severe criticism of corruption, and in January 2001 he was declared dismissed by the Supreme Court. Deputy President Gloria Arroyo, with the support of the Catholic Church, the military and the opposition, could be appointed new president.

Estrada was sentenced to life imprisonment in 2007, but was quickly pardoned by Arroyo. After a violent election campaign, parties that stood near Arroyo got a majority in parliament in May 2001. All of Arroyo’s tenure came to be characterized by political violence. Conflicts with Islamic rebel forces in the south and the Communist New People’s Army continued and repeated peace attempts were stranded. Although the Constitution only allows for a term of office for the President, Arroyo could be re-elected in 2004, since she was not originally elected to office in the usual sense. She was persecuted by charges of corruption but managed to retain power until 2010, despite several coup attempts or alleged coup attempts and four attempts by the opposition to get her deposed.

In the 2016 presidential election, Davao mayor Rodrigo Duterte won by about 38 percent of the vote. One of Duterte’s election promises was to try to reach a lasting settlement with the NPA, but after a fragile ceasefire collapsed, negotiations were suspended and the organization was terrorized by the president.

In 2017, a law was passed by Congress that extended autonomy for the autonomous province of Muslim Mindanao, in accordance with the peace agreement with the MILF from 2014. However, several other armed organizations, some of which have links to the Islamic State (IS), have continued to commit acts of violence in especially the southern Philippines. In May 2017, members of two IS-affiliated organizations, Abu Sayyaf and Maute, occupied large parts of the city of Marawi in Mindanao, prompting President Duterte to declare a state of emergency throughout the island. It took the security forces five months to regain control of Marawi and over 1,000 people were killed in the fighting, while tens of thousands were forced to flee their homes.