The area that is today the Republic of Congo was originally populated by a hunter and sanctuary community. Around 2000 years ago, Bantu- speaking peoples migrated to the area, bringing with them an Iron Age culture. Over time, this culture became more centralized and small kingdoms gradually became large.

The coastal area was explored by the Portuguese in the late 1400s, and from the 17th century French trading stations were established. During the Berlin Conference in 1884, France was awarded the area, which was named French Congo. This included areas that are currently Gabon and the Republic of Congo.

In 1960, the Republic of Congo became independent.

The first settlement in the area that today constitutes the Republic of Congo consisted of hunters, among other batwa (pygmies). Eventually, the native locals were displaced by immigrant Bantu people from the north, who settled down as permanent farmers. One of these people was Bakongo, who had a mighty empire in the 1300s in what is today the two Congo states and Angola.

The Congo kingdom had close relations with Portugal, but disintegrated in the second half of the 17th century after a Portuguese attack and internal strife. To see more information other than history, please visit Abbreviationfinder to learn more about climate, population, government, and economy for the country of Republic of the Congo. Other major kingdoms in the present-day Congo Republic were Tio and Logango; the former also known as Anziku or Teke. The 10th kingdom controlled large areas where it dominated the extensive slave trade. 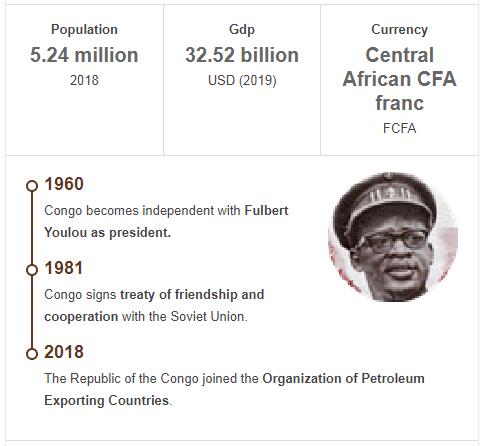 The coastal area was explored by the Portuguese in the late 1400s, and from the 17th century French trading stations were established. King Iloo of Tio entered into an agreement in 1880 with the French colonialist Pierre Savorgnan de Brazza, which made the kingdom a French protectorate. As a result, Belgium’s King Leopold intensified his efforts to establish a colony south of the river. De Brazza led several expeditions inland after 1875, and the capital of Brazzaville in today’s republic is named after him.

During the Berlin Conference in 1884–1885, France and Belgium agreed on how to draw the boundaries between the French Congo and the Free State Congo. French Congo was renamed Central Congo in 1903, and soon after it was excreted as a separate colony within the framework of French Equatorial Africa (created in 1910). Extensive tracts of land were leased to large licensing companies, who ruled hard to secure profits. De Brazza himself led a commission of inquiry that sharply criticized forced labor, ill-treatment and financial predatory behavior, but he died before it could be presented.

While much of the international and contemporary attention is focused on the hard-won exploits of the Free State of Congo (Belgian Congo), the methods used to make the most profit from the colonization of French Congo – with the extraction of ivory, slaves and rubber – were probably just as brutal as in the Free State. Forced labor was also common in the licensed areas of the French Congo. Thousands who fled from Leopold’s Congo to escape the brutality there fled back. As in the Free State/Belgian Congo, it is estimated that the population was halved as a result of oppression and exploitation. And as in the colony in the south, there were also a number of rebellions against the colonial rulers in French Congo.

In 1960, parts of French Equatorial Africa were separated into four independent states: Central Congo (Republic of the Congo), Chad, Gabon and the Central African Republic. Customs and trade cooperation was established between the four countries.

Congo became a self-governing unit within the French Union in November 1958, with Abbé Fulbert Youlou as prime minister. In 1959 he was elected president, and Congo gained independence on August 15, 1960. In 1963 mass demonstrations and general strikes were held in Brazzaville, and the government introduced a state of emergency. The protests led to Youlou resigning as president, and a military council temporarily seized power. A new constitution was passed and Alphonse Massamba-Debat became new president.

In 1964, the radical Movement National de la Revolution (MNR) was founded as the only permitted party. The MRC was declared a Marxist-Leninist, and Congo established close relations with Cuba, China and the Soviet Union. The development in the Congo in the 1960s was filled with regional and political contradictions and dissatisfaction with the armed forces. In 1968, the president was ousted after demanding the dissolution of the MRC, and a revolutionary council was formed to govern the country. This paved the way for full military rule under the leadership of Major Marien Ngouabi, who became Congo’s new head of state.

In 1969, a new Marxist-Leninist party, Parti congolais you travail (PCT), the only permissible, and the country was renamed the People’s Republic of Congo. After several unsuccessful attempts, Ngouabi was assassinated in March 1977, and Colonel Joachim Yhombi-Opango took over as head of state. After pressure inside the army and party, he resigned as president in 1979, followed by Colonel Denis Sassou-Nguesso. In the same year a new National Assembly was elected and a new socialist constitution was introduced. Sassou-Nguesso was re-elected in 1984 and 1989.

At the beginning of the 1990s, there was also a democratization process in Congo. At a party congress in 1990, the PCT abandoned Marxism-Leninism as an ideology for party and state. The one-party system was abolished in 1990, and a large number of parties were established. A national conference was held. It elected a council, the Conseil supérieur de la republic (CSR), which served as a temporary national assembly.

After a new constitution was passed in a referendum, Senate elections were held in 1992. The winner was Union panafricaine pour la démocratie social (UPADS); PCT became the third largest party. The old state party also suffered defeat in the presidential election, which was won by UPADS leader Pascal Lissouba.

From 1993 there were violent clashes between the government and militia groups that supported former President Denis Sassou-Nguesso. The president remained an active participant in the political life of Congo – and returned to power through democratic elections after a devastating civil war. Several peace agreements between the warring parties were broken, and fighting continued in the 2000s.

In 1997, Congo was thrown into full civil war when troops belonging to President Sassou-Nguesso revolted prior to integration into the new national army, but the rebellion was defeated by government forces. Tensions continued with fighting in the capital, between militia groups loyal to Sassou-Nguesso and the forces of President Pascal Lissouba. About 2,000 people, most civilians, were killed. France sent forces to Congo to monitor the evacuation of some 5,000 foreign nationals.

The fighting was essentially between Sassou-Nguesso’s militia and Lissouba’s forces – consisting of the government army and his private militia – for the “ninja” militia of Brazzaville’s mayor Bernard Kolélas. The fighting initially took place until October, when Sassou-Nguesso seized power and deposed Lissouba, who went into exile in Burkina Faso. Sassou-Nguesso assumed the presidency and announced a transitional period of about three years before elections would be held.

The civil war in the Republic of Congo (Brazzaville) took place in parallel with the war in neighboring Democratic Republic of the Congo (Kinshasa), and foreign parties participated in both conflicts. During the war in the Republic of Congo in 1997, Sassou-Nguesso received crucial support from Angola, both with regular troops and aircraft support. Lissouba received support from the Angolan rebel movement UNITA, as well as from the special forces of former President Mobutu Sese Seko in DR Congo. Several of the mercenaries who had fought for Mobutu, including from Belgium, France, Croatia and Ukraine, also participated in Lisbon’s side.

Sassou-Nguesso received political support from several countries in Africa. Chad sent troops; several countries contributed weapons. Towards the end of the fighting in 1997, units from the new DR Congo government also participated in Lisbon’s side. It is said that it was the Angolan support, especially with fighter jets, that decided the war in Sassou-Nguesso’s favor.

An estimated 10,000 to 15,000 people died; large parts of the capital were destroyed and a large part of the inhabitants fled the city. In 1999, Lissouba was sentenced to 20 years in absentia. International human rights organizations stated that all sides of the conflict were responsible for gross human rights violations, including arbitrary executions, torture and extensive use of rape.

The Civil War had political roots, but gave rise to so many ethnicities, and the various militias killed civilians on the basis of ethnic affiliation. Sassou-Nguesso’s forces had their base in the north of the country, while Lissouba gathered their support substantially in the south.

In 1998, a national forum passed a temporary constitution, after which President Sassou-Nguesso announced that Congo would return to a democratic system of government in 2001. The forum also elected a temporary parliament, the Conseil national de transition (CNT). Clashes between militia groups took place in 1998–1999, both around the capital and in parts of the interior, until a peace treaty was signed after mediation from Gabon in 1999. The following year, the civil war was declared over. Militants were demobilized and offered amnesty, and a national dialogue was conducted prior to the elections, held in 2002.

The 2002 presidential election was won by Denis Sassou Nguesso, and his supporters gained a pure majority in parliament. Over a hundred parties took part in the parliamentary elections, the largest being PCT. Peace agreement in spite of armed clashes continued throughout 2002, essentially in the form of attacks from the ninja militia, until a new peace agreement was signed between the ninja militia and the government in 2003. This too was broken, and there was fighting between various militia factions.

Sassou-Nguesso was re-elected in 2009, and in 2015 had amendments to the Constitution, so that he could also stand for a third term. In 2016, he was re-elected.