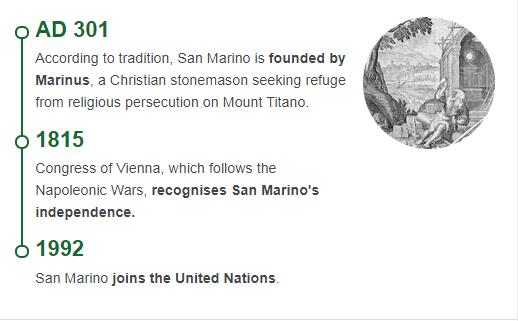 According to a tradition, San Marino arose in the 300s from a settlement of Christians who, with Saint Marinus at the head, fled from the persecution of Emperor Diocletian. In 885 a Castellum Sancti Marini is mentioned. Throughout the centuries, San Marino has been able to maintain a high degree of independence almost entirely without interruption, certainly mainly because of the difficult access. However, it was threatened especially at the beginning of the new era by the papal power, which in 1631, however, recognized San Marino as an independent state. Italy’s unification did not change its status, but through a treaty of friendship in 1862, San Marino was placed under Italian patronage. Its customs, post and telegraph are now linked to Italy, as well as the currency. To see more information other than history, please visit Abbreviationfinder to learn more about climate, population, government, and economy for the country of San Marino.

Finances. – Finance has revenues of about 5 million lire, due, for almost 1,000,000 to monopolies, then to income tax, postal taxes, etc., and for 1,500,000 to the annual fee of the Kingdom of Italy, according to the convention of June 24, 1921, corollary of the “friendship” convention of June 12, 1897 and in compensation for the obligations assumed by the republic not to issue paper money, not to cultivate tobacco and distillation of spirits, and for customs passages ; presents corresponding expenses for administrative, diplomatic, school, public works, etc.

Education. – Two deputies for studies preside over education: there are rural schools in all parishes; agricultural training school; supplementary courses; a highly reputed college; a classical high school-gymnasium. It is equated to the Italian high school-gymnasiums; there is also the teaching of history and San Marino law; annexed to the physics institute, it is a perfect meteorological observatory (alt. 700 m), corresponding to Rome. In the capital there are also the state archives and a museum with a rich art gallery and a library of over 20,000 volumes, very important for the history of the republic.

Communications. – External communications take place through the 3 ordinary roads radiating from San Marino-Borgo: the national road to Serravalle in Rimini or the 25 km long Ausa road, the 37 km long Conca road to Morciano in Cattolica, the road to Verucchio (332 m) in Rimini 28 km long; and for the recent (1932) electric railway, San Marino-Borgo in Rimini, built according to agreements with the kingdom (treaty 26 March 1927). This is 32 km long, of which the 20 in the territory of the republic are of particular interest for their daring, ordinary and helical tunnels (17 per m. 3870), views; from the Borgo Maggiore station you cross the vertical drop of the wall with many tunnels and reach the San Marino station, at 643 meters above sea level. Finally, the ancient ordinary Marecchia railway, from Rimini to Mercatino, touches the border of the republic.