At least 100,000-year-old finds are known from the Senegal River terraces. About 4000 BC varieties of rice and millet were grown, and ceramics and ground stone tools were used. Iron was in use during the first millennium AD Somewhat later, thousands of megalithic monuments and burial mounds were built, which may be associated with the gold trade (see Ghana).

During the Middle Ages, several kingdoms existed in the area of ​​present-day Senegal. In the north, the Toucouleur people in the 11th century established the state of Tekrur, and in the south several different Wolofriks in the 13th century joined the state of Djolof. The eastern parts were ruled in the 1000s by the Ghanaian Empire (Wagadu) and during the Late Middle Ages by the Mali Empire. From the middle of the 15th century, European states with Portugal built trading stations along the Senegal coast. Most important was the French city of Saint-Louis, built in 1659 at the mouth of the Senegal River as the center for trade in, among other things, rubber arabic during the 17th and 18th centuries. The island of Gorée outside the present Dakar became a center for the slave trade. After 1850, peanut cultivation became the main industry after attempts at cotton plantations failed. 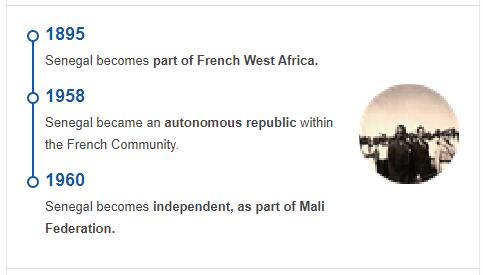 At the Vienna Congress in 1815, Senegal had been recognized as a French colony, and France’s policy was characterized early on by a deliberate assimilation of the African population with a view to eventually incorporating Senegal with the mother country. To see more information other than history, please visit Abbreviationfinder to learn more about climate, population, government, and economy for the country of Senegal. In 1854, the dynamic officer Louis Faidherbe became governor. He developed the teaching system, organized native Senegalese troops, incorporated the coastal areas north and south of Gambia with the colony and founded Dakar in 1857. Senegal then became the bridgehead for France’s colonial expansion towards Africa’s interior along the Dakar – Djibouti line. From 1895, Senegal’s governor was at the same time general governor of French West Africa.

During the interwar period, assimilation policy contributed to the emergence of an educated domestic elite, which demanded part of the political power. After World War II, the Senegalese became French nationals, and Senegal gained overseas territory. In 1958, Senegal became autonomous republic within the newly formed French Commonwealth. The following year it entered into a federation with Mali (formerly French Sudan), but broke away in 1960 and formed an independent state with the profane Leopold Sédar Senghor as president. Although Senegal was a one-party state in the years 1966-76, Senghor laid the foundation for the country’s development into one of Africa’s most stable political democracies. By a constitutional change in 1976, three parties were allowed to stand for election. SenghorThe Socialist Party du Sénégal (PS) still prevailed in the first free parliamentary elections that year.

At Senghor’s resignation in December 1980, he was succeeded in early 1981 by Prime Minister Abdou Diouf, who had already officially been appointed the next head of state in 1976. Diouf released party formation, and in 1991 made a new constitutional amendment to allow opposition parties to participate in government work.

During independence, Senegal has been relatively free from the conflicts that have characterized many other African states. The 2000 presidential election was preceded by unrest, but when the PS lost its presidential post for the first time, however, the change of power took place in order. The 2001 parliamentary elections, when the PS was reduced to just the third largest party, was hailed together as one of the most well-executed and correct elections in Africa.

Economic austerity programs under the auspices of the International Monetary Fund have sometimes created social tensions. The crisis measures triggered by the devaluation of the currency by 50 percent in January 1994 triggered violent riots in Dakar. The sinking of the state-owned ferry Joola in September 2002, when more than 1,800 people were killed, caused a national trauma comparable to that which hit Sweden after the Estonia disaster. The accident not only led to the resignation of the entire government; the commander-in-chief and the Air Force commander were also dismissed as a result of the defense’s weak efforts in the rescue work.

The most serious conflict in Senegal has been the armed separatist uprising that periodically harmed many human lives in the southern Casamance region. In the area south of Gambia, which is partially cut off from the rest of the country, the feeling of disregard led to the formation of the separatist movement Mouvement des forces démocratiques de la Casamance(MFDC) in the early 1980s. The conflict was kept at a low level for a long time, but ignited in 1990, prompting the army to send reinforcements to the area. Although a peace commission was formed, the fighting intensified from the end of 1992, when in a few months more than 500 people were killed and tens of thousands fled their homes. Armistice was closed in July 1993, but fragmentation within the MFDC led to new outbreaks in 1995. Parallel to attempts at peace talks and mediation by neighboring countries Gambia and Guinea-Bissau, both of which risked being drawn into the conflict, civil war and assaults continued until and including 2003, when the MFDC declared the conflict annexed. A formal peace agreement was signed on December 30, 2004. However, battles have flared up several times since then, including 2006, when two factions within the MFDC fought against each other,

During the years 1982–89 Senegal together with the Gambia formed the Confederation Senegambia, which for Senegal meant better communications between the northern and southern parts. The confederation was dissolved when the Gambia refused to move on to a union.

Senegal, especially the Casamance southern region, acts as a springboard from which African emigrants try to get to Europe via the Canary Islands. Many people perish during the boat trip. Senegal and other West African countries have agreed with Spain to strengthen coastal surveillance to prevent the flow of refugees. Poverty and high unemployment, especially in the cities, are a reason why so many people are applying abroad.

The fiftieth anniversary of Senegal’s independence from France was celebrated in April 2010. In Dakar, the disputed giant statue Le Monument de la Renaissance africaine, which cost about US $ 27 million, was unveiled. On Independence Day, April 4, France formally left its military bases in the country.

Ahead of the 2012 election, Abdoulaye Wade, president since 2000, stated that he was running for a third term, despite the fact that the constitution does not allow more than two. The president claimed that the rule did not apply to him because it was introduced after his accession in 2000 and was supported by the country’s constitutional court which approved his candidacy. However, popular musician Youssou N’Dour was not allowed to perform. Wade received the most votes in the first round of elections, but in the second round Macky Sall received support from the other opposition and was elected new president with 66 percent of the vote.

The controversy before the election led to violent clamor. However, the election movement and the election itself got approved by international observers. The parliamentary elections in July of that year were a great success for the newly elected president; the alliance Benno Bokk Yakaar, which included Sall’s party APR, received 119 out of 150 seats in a poll that attracted just under 37 percent of voters.

In 2016, a referendum was held in which a majority of voters supported the proposal to shorten the president’s term of office to five years; after the 2007 election, this had been extended to seven years.

Ahead of the 2019 presidential election, Macky Sall’s toughest opponent looked to be Khalifa Sall (born 1956), popular mayor of Dakar, and Abdoulaye Wade’s son Karim Wade (born 1968). However, both of these were forbidden to stand in the elections because they were sentenced to multi-year prison sentences. In February 2019, the incumbent president received 58 percent of the vote in the first round of elections.

History of Senegal
Tagged on: Senegal