The uninhabited archipelago of Seychelles was registered by the Portuguese seafarer Vasco da Gama in 1502, but had probably already been known for a long time by Arab seafarers and traders who sailed on the East African coast.

The first documented visit to the islands was made by a British expedition in 1609.

The islands were explored by French expeditions in 1742 and 1744 and annexed by France in 1756. French settlement increased in 1768. The French settlers started plantation operations with the help of African slave labor. The property was named Séchelles after the then French finance minister; changed to the Seychelles of the United Kingdom.

The British took control of the archipelago in 1794, and gained formal dominion in 1814 through the so-called Paris Treaty. The Seychelles were first administered with Mauritius, but in 1903 gained the status of a British crown colony. The archipelago’s strategic importance made it an important telecommunications center during both world wars.

In 1948, a legislative assembly was elected. To see more information other than history, please visit Abbreviationfinder to learn more about climate, population, government, and economy for the country of Seychelles. 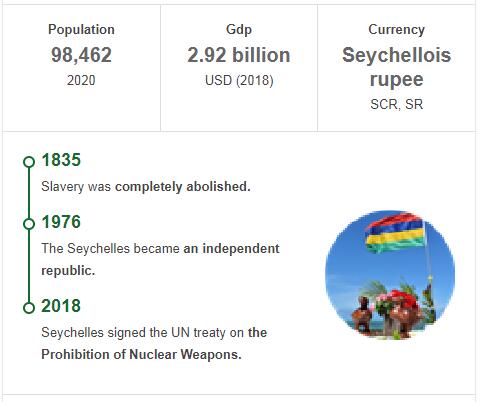 In 1970, Mancham proposed that the Seychelles be incorporated into the United Kingdom, but the proposal was rejected by the British authorities, and in 1975 the country was given internal autonomy with Mancham as president and René as prime minister. The SDP later changed its position, and Mancham became the independent Seychelles’ first president; full independence was achieved on June 29, 1976. René became prime minister.

In 1977, supporters of the SPUP made an armed coup, deposed Mancham and inmate René as president. In 1979, in a constitutional amendment, the Seychelles became a one-party state, and SPUP became the only permitted party under the name of the Seychelles People’s Progressive Front (SPPF). Rene’s regime survived several coup attempts, including invasion attempts by mercenaries from South Africa in 1981.

A political upheaval took place around 1990, and in 1991 René and SPPF agreed to allow free party formation. Mancham returned in 1992 from his exile in the United Kingdom. A new constitution was passed in 1993. In the election that year, SPPF became the largest, with Mancham’s Democratic Party in opposition. SPPF strengthened its position in the 1998 elections.

René won the 1993 presidential election and was re-elected in 1998 and 2001. He resigned in 2004, and Vice President James Alix Michel succeeded him as president. SPPF also retained its majority in the 2002 elections, with the Seychelles National Party (SNP) as the largest opposition party.

At the 2006 presidential election, Michel was re-elected. In the 2007 parliamentary elections, the SPPF government won a majority with 23 of a total of 34 representatives; the remaining went to Seychelles National Party-Democratic Party (SNP-DP). Parliament’s 2006 decision to ban political and religious organizations from operating radio stations caused unrest. In May 2011, Michel was re-elected as President, with 55.5 percent of the vote, against 41.4 percent for SNP’s counterpart Wavel Ramkalawan. In the October parliamentary elections, SPPF took all the seats, with 88.6 percent of the vote. The SNP boycott the election.

Since 2009, the Somali pirate has expanded its operation area off the coast of eastern Africa also south to the Seychelles. In 2009, the EU signed an agreement to combat the piracy with the Seychelles, and some countries, including France and the United States, provided bilateral support. The first prosecution of pirates took place in the Seychelles in 2010. In October 2011, Norway established a surveillance aircraft on the Seychelles, as part of the international Operation Ocean Shield.

The Seychelles led a radical, alliance-free policy under President René. The country has been a driving force for regional cooperation in the Indian Ocean, and co-founded the Commission for the Indian Ocean (IOC) in 1983 and supported the declaration of this region as a “peace zone”. Seychelles has also been a member of other regional organizations, but in 2004 left the South African Cooperation Organization (SADC) and the Indian Ocean Rim Association (IORA), mostly for economic reasons.

At the same time, the Seychelles have been somewhat oriented towards Asia. China’s expanded engagement in Africa from the early 2000s has also included the Seychelles, and China’s President Hu Jintao completed his Africa trip in 2007 in the Seychelles, where several cooperation agreements were signed.

The Seychelles have maintained particular contact with their historically closely associated major powers, the United Kingdom and France. A 1976 agreement allowed the United States to maintain a satellite monitoring station in Seychelles. The station was closed in 1996, and relations with the United States have been somewhat measured because of Seychelles’ radical foreign policy and opposition to military superpowers in the Indian Ocean.