The first population of the Solomon Islands is linked to the expansion of the Lapita culture, which spread over the southern Pacific region from about 1300 BC. Excavations in i.a. Nenumbo on the island of Ngaua in the east has uncovered a settlement with lapita ceramics from 1100 BC The settlement later shows traces of long-distance contacts with other island groups. obsidian constituted an important commodity. 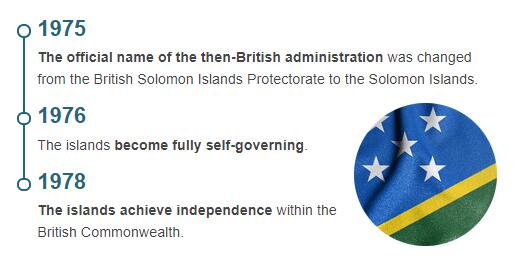 The Solomon Islands archipelago was reached in 1568 by Spanish explorers; however, their attempt to found a colony in 1595 failed. Around 1860, Australian shipowners began a tough recruitment of cheap labor from the Solomon Islands to plantations in Australia. Germany and Britain established protectorate in the Archipelago Act 1885 and 1893. In exchange for their interests in Samoa, the British were allowed to take over German possessions in the Solomon Islands, and the archipelago became a British colony in 1899, with the exception of Bougainville and Buka which were part of German New Guinea. After World War I, these two islands, together with German New Guinea, came under Australian management.

Parts of the Solomon Islands were occupied by Japan in 1942, and major naval and jungle battles preceded the Allies’ recapture: perhaps the most famous war scene was the island of Guadalcanal.

Independence within the British Commonwealth was achieved in 1975 and independence in 1978. In 1984, the Government issued a ban on nuclear-armed vessels to stay in the Solomon Islands, which together with bitter fishing wars has clouded relations with, among other things. USA. To see more information other than history, please visit Abbreviationfinder to learn more about climate, population, government, and economy for the country of Solomon Islands.

Important sources of revenue are licensing agreements with foreign forestry and fishing companies. Irregularities in license management, reckless harvesting methods and the risk of overexploitation have led to protests from both the indigenous population and Australia. The neighboring country of Papua New Guinea has tried to quell the conflict in Bougainville, which, together with Buka, has tried to form its own state. The government of the Solomon Islands fears that the conflict can spread, as it is only a short canoe trip (8 km) between the Solomon Islands western border and Bougainville, and has called on the Papuan government to resolve the conflict by peaceful means.

After independence (1978), the conservatives P. Kenilorea (1978-81; 1984-85), E. Alebua (1985-89) and S. Mamaloni (1981-84; 1989-93) took over the leadership of the government., 1994-97), moderately progressive. In 1997, the new prime minister B. Ulufa‛alu, leader of the Solomon Islands Liberal Party (SILP), promoted a broad reform plan that included a sharp reduction in public spending. The strong contrasts that erupted between the residents of the Guadalcanal island and the immigrants from the neighboring provinces led to a coup d’état in 2000. The new head of the government became M. Sogavare, leader of the People’s Progressive Party (PPP). The 2001 elections were won by the People’s Alliance Party (PAP), prime minister became A. Kemakeza. During 2002 the economic and social situation worsened and in 2003 Kemakeza asked for Australian and New Zealand military help to restore order. At the beginning of 2004 Australia e New Zealand they were able to reduce their own quotas. In 2006, new political elections were held, marked by serious incidents. M. Sogavare (of the PPP), the new head of government, was forced to resign at the end of 2007 and was replaced by DD Sikua, followed by D. Philips in 2010 and GD Lilo in 2011. The legislative elections held in November 2014, the first since the withdrawal of the regional assistance peacekeeping mission (Ramsi), recorded the victory of independent candidates, who won 32 of the 50 seats in Parliament, revealing a context of pronounced political fragmentation in which the consultations for the formation of a transitional government.