South America’s first residents were descendants of the groups who immigrated to North America from northern Asia during the last ice age. The oldest traces of humans currently found in South America are 12,000-14,000 years old; The remains of the period have been found in a number of places throughout the continent. The first nomadic hunter cultures nourished themselves by hunting various, now extinct animal species: mastodonts, elephants, giant belt animals, horses and giant mammals. Wild plants became for approx. 12,000 years ago an important part of the food base.

In the period 6000-3500 BC the population increased, especially along the west and north coasts, and communities became more settled. Among other things, it hung together with the growing importance of agriculture; cultivation of beans is known from Peru approx. 7000 BC, and corn growing from Ecuador a thousand years later. About 2500 BC arable farming was common in the highlands and along the coasts. Ceramics are known from Ecuador and Colombia from ca. 3500 BC, while the first major ceremonial centers emerged ca. 3000-2500 BC in Peru, where pottery was still unknown. The development accelerated after approx. 2000 BC, not only on the coasts and in the highlands (see Chavín de Huántar and Paracas), but also along the rivers of the Amazon lowlands, where a variety of cultures with independent ceramic traditions developed. Gradually, several high cultures emerged with centralized leadership and social stratification; however, it occurred only in the highlands and on the coast of western South America; see Moche, Nazca, Huari, Tiahuanaco, Chimú, Vicus and Incas. Independent cultural development on the South American continent was interrupted when the Spaniards conquered the Incarct in the 1530s. 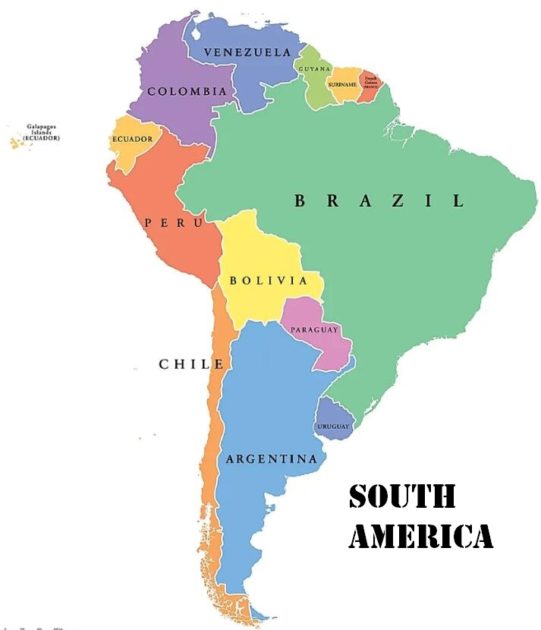 Not until 1498 on his third voyage to the New World did Christoffer Columbus discover South America, following the north coast from Orinoco to Trinidad. In 1499, Alonzo de Ojeda (c. 1466-c. 1508) sailed the same coast from Guyana to the Guajira Peninsula.

Not until 1498 on his third voyage to the New World did Christoffer Columbus discover South America, following the north coast from Orinoco to Trinidad. In 1499, Alonzo de Ojeda (c. 1466-c. 1508) sailed the same coast from Guyana to the Guajira Peninsula.

The road to independence and nation formation

In the Spanish possessions, a growing conflict of interest arose between the Peninsular and the Creole (European and American-born Spaniards, respectively). because the Creoles were not allowed to participate in the export trade.

The original Native American population is still present in the rainforest, but otherwise the population of the South American countries is culturally mixed due to immigration from around the world, beginning with the Spanish and Portuguese colonization in the 1500s.

In some countries, there are conspicuous social differences arising from the management of the 1980s economic crisis. Today, the countries’ economy is generally under control. Most of the South American countries are middle income countries, but there are also stronger and weaker economies in between.

Two landscape elements dominate large parts of South America: the 7000 km long Andes mountain range that extends along the west coast, and the vast rainforest area of the Amazon. East of the Andes, the landscape consists of river plains and low plateaus, interrupted by the Guyanese highlands, Mato Grosso and Brazil’s highlands. These landscapes are very ancient, developed in areas that have been geologically stable for a very long time. Farther south is the flat and wind-blown Patagonia.

The Spanish and Portuguese colonization from the 1500s. had disastrous consequences for the indigenous population, which succumbed to wars, forced labor and foreign diseases. The Indians were pushed away from the most fertile areas, had to give up their original way of life and now in many places are tempting a miserable existence in high mountain areas. In Patagonia and in Tierra del Fuego they were completely eradicated.

For the last 500 years, other continents have invaded the continent. Colonization and import of labor have created a culturally highly mixed society. The Spaniards and especially the Portuguese created plantations and introduced slaves from Africa.

On the north coast, the Dutch, French and English established smaller colonies in the 1600s. In the 1800s. the European immigration of Germans and Italians, while Asians, especially Japanese and Chinese, flocked to the early 1900s.

The various peoples have in many places established themselves in unified areas, and here you can still see the culture of the homeland preserved in, among other things. architecture, business culture and food committees; German “colonies” in South Brazil and Paraguay, English and Welsh in Argentina and Chile, Hindu communities in Guyana and Japanese communities in Brazil. Across South America, Arab minorities hold a significant position in trade. See also Argentina – Danish Immigration).

Indigenous Native American groups can still be found in the Amazon rainforest, but whites and blacks have often mingled with the Indians and with each other. In all countries there is legal equality for the law, but racial discrimination is widespread. In general, economic and political influence and social status can be read by the skin color: the brightest are in power, and dark skin color often indicates poor education, unemployment and poverty.

The population is very unevenly distributed, according to Countryaah. Large parts of the rainforest, the driest parts of the Andes and Patagonia are largely uninhabited, while large population concentrations are found along the coasts. The continent is characterized by uneven land distribution, and in the second half of the 1900s. left large sections of the rural population leaving their homes to seek happiness in the big cities.

In 2000, 28 cities exceeded 1 million. including some of the world’s largest metropolises (São Paulo, Rio de Janeiro, Buenos Aires), and vast slums are found in most.