In prehistoric times, the island was closely linked to the Indian subcontinent, and Stone Age finds from both Paleolithic, Mesolithic and Neolithic times are essentially the same type as on the mainland. The general assessment is that the Bronze Age of Sri Lanka, like South India, started late, ie. first during the millennium BC The transition to the Iron Age with its megalithic tomb culture is difficult to date. Which language carriers who first populated the island are also unknown; remnants of an indigenous population make up the population group of wagers.

Indians who spoke an early form of Sinhalese reached the Sri Lankan Buddhist mission in the 500s BC. according to native tradition; however, most researchers postpone immigration to the 400s and 300s BC Tamil-speaking groups from the mainland are considered to have populated the northern part of the island during the centuries prior to the Kr.f. 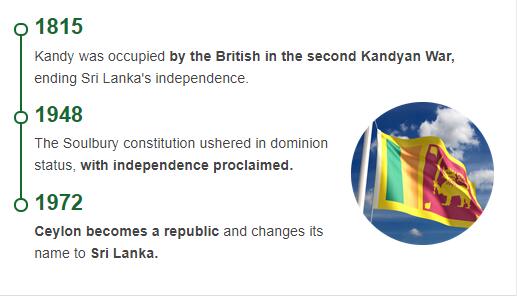 Buddhism was brought to Sri Lanka from India, and as Hinduism prevailed in India, the Sinhalese came to perceive themselves as a chosen people with the task of preserving Buddhism. Sri Lanka was separated enough from its vast neighboring country to develop a cultural characteristic but not distant enough to avoid invasions. From the 20th century BC to the 9th century AD Sri Lanka experienced a cultural and economic heyday with Anuradhapura as its capital. The settlement was concentrated to northern and eastern Sri Lanka, the dry zone. To see more information other than history, please visit Abbreviationfinder to learn more about climate, population, government, and economy for the country of Sri Lanka.

The key to Sri Lanka’s history for nearly 1,500 years was the irrigation of rice cultivation. Grand irrigation systems with canals, dams and water reservoirs were built. The villages were self-sufficient units with nature conservation, and the land was jointly owned by the agricultural caste, which, however, was taxable to the king. The population grew and the king’s power was strengthened during a multi-hundred-year peace period.

From the 7th century, Arab merchants arrived, profiting from the spice trade. In the 8th century, the Sinhalese began to intervene in the power struggles in South India and call for help from them. As a result, around the year 1000, the South Indian Cholar Empire conquered Anuradhapura and founded a Tamil province around Polonnaruva. The Sinhalese were driven south, but managed to defeat Chola in 1070.

During the second half of the 12th century, Sri Lanka united, and the Polonnaru Empire experienced a cultural boom. But the next four hundred years meant a downturn for Sri Lanka. Civil disputes flared up, irrigation facilities expired and were abandoned. A Tamil kingdom around Jaffna had its heyday in the 1300s and the beginning of the 1400s. The Sinhalese moved to the south-western parts of Sri Lanka. In central Sri Lanka, in the 1480s, a kingdom emerged around Kandy, the last Sinhalese kingdom, which existed for over 300 years and was the stronghold of Buddhism.

Sri Lanka’s spices and strategic location tempted European trading nations. The Portuguese arrived in 1505, took over the cinnamon trade from Arab merchants and plundered the population. From 1619, when the Jaffna Empire was annexed, the Portuguese ruled the coastal areas of the island. They were expelled in 1658 by the Dutch, who entrenched all trade in Sri Lanka, established cinnamon plantations and increased spice exports. The Dutch possessions were occupied by the British in 1795-96, which in 1802 made Sri Lanka a crown colony. They conquered Kandy in 1815-18, and thus the whole of Sri Lanka was once again controlled by a single power.

The British expropriated large areas of land and devastated vast forests to plant coffee crops. However, these were attacked by rust fungus, and then tea became the main plantation crop. Tea and rubber, for British profitable export goods, were grown at the expense of rice, the main food of the population. Private ownership of the land was introduced, and the peasant population was drawn into the monetary economy through taxation. A uniform judicial system was introduced. Banking, commerce and shipping were controlled by the British, who built roads, railways and schools and improved health care. All this led to major social changes. British industrial goods competed much of the craft in Sri Lanka. A new, English-speaking bourgeoisie emerged.

A nationalist movement emphasizing Sri Lanka’s glorious Buddhist past emerged, and the Ceylon National Congress, founded in 1919, worked for constitutional reform. Its leader belonged to the English-speaking elite, and British supremacy was long taken for granted. Trade union organizations were formed, and in 1931 elections were held with universal suffrage – earlier than anywhere else in Asia.

After the Second World War, the nationalists demanded independence, and in 1948 Sri Lanka became independent but remained a member of the Commonwealth. In the first decade, Sri Lanka’s political system was cited as an exemplary example of parliamentary democracy. Two dominant parties were established, the Conservative United National Party (UNP) and the left-leaning Sri Lanka Freedom Party (SLFP). The bipartisan system was viable, the judiciary was independent of political power, law and courts were respected and the army abstained from political action.

Behind the beautiful facade, however, the two dominant Sinhalese parties conducted an activity that would have disastrous consequences. The parties’ struggle for votes and power had, from 1948 and especially from the mid-1950s, exploited the ethnic contradictions between Sinhalese Buddhists and Tamil Hindus. During the British period, civil servants had mainly been recruited among Tamils, but after independence, the “Sri Lankan Tamils”, living in the north and east, became increasingly excluded from power and influence.

As early as 1956, Sinhalese was proclaimed an official language and the language policy “Sinhalese only” was introduced. Both Buddhism and Sinhalese were favored in the constitution in 1972, which impaired the opportunities of the Tamil people. During the 1970s, lower quotas were set for Tamils when accessing higher studies. The increasingly discriminated Tamils sharpened their demands from federalism to separatism, that is, their own Tamil state. Nationalist Tamil parties were formed, as was an armed separatist group that in 1976 took on the name Liberation Tigers of Tamil Eelam (LTTE; see Tamil Tigers).

Armed clashes between the army and the LTTE occurred sporadically during the latter part of the 1970s. A full civil war broke out in 1983, after an LTTE attack on a military patrol had been answered with pogrom-like persecution of Tamil civilians. The outbreak of war led to bans that advocated separatism. After Indian mediation, a peace agreement was signed in 1987, after which an Indian force was sent to the island to monitor the disarmament. However, doubts about the government’s honest will soon caused the guerrillas to give up arms, and fighting broke out instead between the LTTE and the Indian army. In 1990, the Indian troops left Sri Lanka.

In addition to the Tamil conflict, Sri Lanka was also plagued by a revolt in the southern and western parts of the country during the late 1980s. Behind the revolt lay the People’s Liberation Front (Janatha Vimukthi Peramuna, JVP), originally a left-wing extremist student movement formed in the 1960s that in 1971 made a disastrous attempt at “revolution”. The uprising was defeated by the army with extremely brutal methods, and at least 15,000 young people were killed within a week. In the 1980s, the resurrected JVP was transformed into a Sinhalese-nationalist movement that brought renewed violence in protest against what it saw as concessions to the LTTE. Between 1987 and 1990, tens of thousands of people were killed in a mutual assassination between the JVP and the army and the government side’s death patrols.

In the 1994 elections, 17 years of UNP rule were broken, and SLFP leader Chandrika Kumaratunga (born 1945), both parents of whom were former prime ministers, became president. Although she promised peace with the Tamils, the war against LTTE increased in strength. Until 2002, a brutal trench war was fought in which the army took control of parts of the Tamil-dominated areas very slowly. The guerrillas brought the war into Sinhalese soil through a series of political murders and suicide attacks.

However, it was clear that neither side could win militarily, and Norwegian mediation attempts, launched in 2000, resulted in a cease-fire agreement in 2002, monitored by observers from the Nordic countries. Negotiations began between the government and the LTTE, and the peace hope provided a powerful boost to the war-damaged Sri Lankan economy. After six months, however, the guerrilla interrupted the negotiations in protest against what it saw as failing promises of financial support to the Tamil areas. Shortly thereafter, the government declared that the peace process was over. Attempts to restart negotiations fell on internal contradictions between both Tamils and Sinhalese. The resentment of the Tamil population was compounded by the lack of reconstruction efforts following the December 2004 flood wave disaster, when 30,000 Lanes were killed.

When Mahinda Rajapaksa (born 1945) succeeded Kumaratunga as president in November 2005, the political tone became even more fierce and the violence increased again. From the latter part of 2006, there was an open war again, which drove hundreds of thousands of civilians into flight. In the harsh climate, the government increasingly criticized human rights violations and limited freedom of the press. From 2008, the army gained a clear upper hand in the war and pushed LTTE north. In March 2009, all Tamil strongholds had been conquered and the guerrillas were surrounded in a small jungle area. In May of the same year, the LTTE leader Veluppilai Prabhakaran (1954-2009) was killed and the government declared the war ended.

The victory over the LTTE made Rajapaksa popular with large sections of the war-weary population. Following a new election victory in 2010, Rajapaksa’s party, the United People’s Freedom Alliance (UPFA), gained its own majority in Parliament and Rajapaksa was able to strengthen his grip on power. His increasingly authoritarian rule led to his surprising loss in the presidential elections held in January 2015. The country was ruled by President Maithripala Sirisena (born 1951) from the Sri Lanka Freedom Party (SLFP), which is part of the alliance UPFA, until 2019. This year Presidential elections were won by Gotabhaya Rajapaksa (born 1949), brother of Mahinda Rajapaksa.

On Easter Day, April 21, 2019, several coordinated acts of terror took place in Sri Lanka. Three churches and several hotels in the cities of Colombo, Negombo and Batticaloa were exposed to explosive attacks, most of them by suicide bombers. A total of about 300 people were killed. More than 30 foreign tourists were among the victims, but mainly Christian Sri Lankans were affected. The Sri Lankan government acknowledged that it had received information about an imminent attack on foreign intelligence services but had not taken any action. The Islamic State assumed responsibility for the death, which was said to be a revenge for the attack on two mosques in Christchurch, New Zealand, in March 2019.