Suriname belongs to the field of culture between the rivers Orinoco and Amazon, which in historical times populated by arawakfolket (see Arawak). The region may have been inhabited as early as 8000 BC; it is clear that its coastal resources were used intensively around 4000 BC. Corn and manioc were grown from about 1000 BC with burning, but hunting, fishing and gathering remained dominant. The pre-European societal structure consisted of small, often warlike chiefdom, whose buildings and implements, mainly organic materials, were rarely preserved. 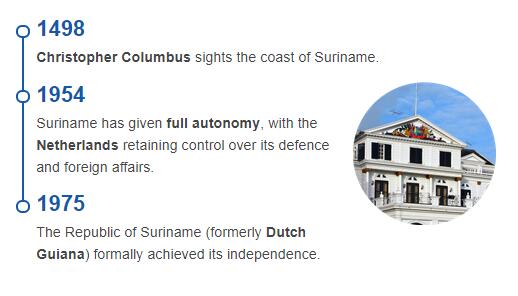 In 1499 the first Spaniards came to the coast of Surinam, but the area was first taken over by the Europeans during the 17th century. The Netherlands received the present Surinam of England in 1667 in exchange for New Amsterdam (New York). The colony, called the New Netherlands, developed into a major producer of sugar. Until 1863, the labor force consisted mainly of African slaves. Many of these (so-called maroons) fled inland and formed independent republics, whose existence was formally recognized by the Netherlands in 1761, and their descendants still live in the interior of the country. After the abolition of slavery in 1863, Indians (called Hindustani), Javanese and other cheap labor were attracted to the sugar plantations. Surinam’s ethnic composition is in turn reflected in the country’s political parties, which are ethnically based. In 1954, Surinam gained autonomy and 1975 independence.

From 1975 to 80, the country was ruled by an alliance of parties (Nationale Partij Kombinate), which represented Creole and Hindustani. In 1980, the military took power under the leadership of Dési Bouterse, whose left-wing stance was modified after the American invasion of Grenada in 1983. Between 1986 and 1991, an intense guerrilla war against Bouterse was fought in the traditional areas of the Maroons. At the end of the 1980s did the country a civilian government, but Bouterses direct power increased again after a new miltärkupp 1990. In elections held in 1991 won the New Front, which formed the coalition government with Ronald Venetiaan (born 1936) as president. In 1992, Bouterse resigned as leader of the army.

In the 1996 election, the New Front lost its support, and the National Democratic Party (NDP), which has the strongest support of the military, came to power; Jules Wijdenbosch (born 1941) was named president. Bouterse, however, retained his role as ruler behind the scenes throughout the 1990s and also ran in the 2005 presidential election, won by the Venetian. Since 1995, Surinam has been a member of the Caribbean Community Association. Relations with the Netherlands have improved somewhat, and the Netherlands is Surinam’s main contributor, but a diplomatic problem is still Bouterse, who is wanted by the Dutch police, accused of involvement in cocaine smuggling. A multi-year border dispute with neighboring Guyana was resolved in 2007 through mediation by the UN. To see more information other than history, please visit Abbreviationfinder to learn more about climate, population, government, and economy for the country of Suriname.

In the 2010 election, Bouterses’ coalition won 23 out of 41 seats in parliament, while incumbent President Venetian’s Alliance New Front received 13 seats. The president is elected by Congress and Bouterse needed the support of another party to be elected. He was eventually supported by Ronnie Brunswijk (born 1961), one of his former bodyguards who led a rebellion against Bouterse during his dictatorship in the 1980s.

Since Bouterse is internationally wanted for drug smuggling following a verdict in the Netherlands, the election led to diplomatic conflicts; for example, no other heads of state came to the presidential installation. In 2012, Parliament voted for a law that granted Bouterse immunity for crimes under his previous rule in the 1980s, which led to new harsh criticism from the Netherlands. In 2013, the president’s son, Dino Bouterse (born 1972), was arrested in Panama from where he was extradited to the United States, accusing him of drug smuggling, illegal arms trafficking and terrorism. He was already sentenced in 2005 to eight years in prison in Suriname but released after three years.

Dési Bouterse has also been accused of being responsible for a massacre of 15 regime critics in 1982. In November 2019, a military court sentenced the president to 20 years in prison for this incident, often referred to as the “December assassination”. Bouterse argued that the verdict was politically motivated and refused to resign.

History of Suriname
Tagged on: Suriname