In 1970, at Zuozhen in southern Taiwan, a fossil of a human head bone that was estimated to be between 30,000 and 10,000 years old was found. Compared to the thousands of stone implements from the somewhat later Changbin culture found in 1968-69, this is the most important paleolithic find in Taiwan. Among the Neolithic finds, which have also been found mainly in recent decades, are Dabenkeng, Fengbitou and Yuanshan. Findings have also been made from the megalithic bone culture. Similar findings on the Chinese mainland may indicate their impact. 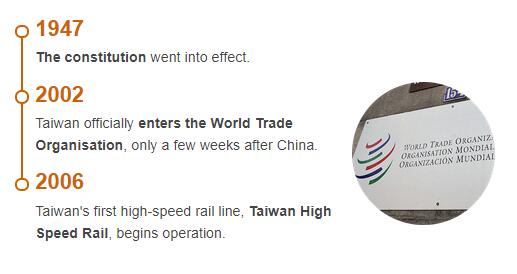 The earliest mention of Taiwan in Chinese sources may be in a work from about 270 AD. describing the customs at a place called Yizhou. Although sporadic contacts occurred, it took a long time for China to start showing greater interest in Taiwan. At the end of the 16th century, a Portuguese island is named as Ilha Formosa (‘the beautiful island’), the origin of the former western name of Taiwan, Formosa. The Portuguese set up a warehouse in Taiwan at this time, but soon the Dutch became the dominant Europeans through fortresses built in southwestern Taiwan from 1624. They were followed by the Spaniards, who built fortresses in northern Taiwan from 1626, but these fell in 1642 after Dutch attacks. To see more information other than history, please visit Abbreviationfinder to learn more about climate, population, government, and economy for the country of Taiwan.

The Dutch were in turn driven from Taiwan by Zheng Chenggong (Koxinga), a supporter of the 1644 overthrow of the Chinese Ming Dynasty, in 1661-62 from Taiwan . However, the new Qing dynasty decided to destroy the Mingan pendants and conquered Taiwan in 1683, which for the first time became part of China. By this time, a significant number of Chinese had immigrated to the island. Taiwan remained part of China – from 1885 as its own province – until 1895, when it fell to Japan after China’s defeat in the Sino-Japanese war. Japan mainly focused on making Taiwan a supplier of rice and sugar for the Japanese market, but a certain industrial build-up also took place. After Japan’s defeat in World War II, Taiwan became Chinese again.

When the Communists in China went on to victory in the civil war of 1946-49, many of the Nationalist Party’s (Guomindang) supporters fled the mainland to Taiwan, and were eventually followed by the party’s leader, Chiang Kai-shek. In Taiwan, until his death in 1975, he continued as president of the Republic of China to claim to be the legitimate leader of the entire country and to declare his intention to recapture the Chinese mainland. His son and successor Chiang Ching-kuo continued his father’s policies, but reformed in the last years before his death in 1988 that legalized certain contacts with the People’s Republic of China and the democratization of Taiwanese politics began.

Under the successor Lee Teng-huis management increased contacts, mainly economic ones, with the People’s Republic, while political relations were sometimes tense. Negotiations on future relations began in the early 1990s, but were interrupted by the People’s Republic in protest of President Lee’s trip to the United States in 1995. Instead, the Chinese regime carried out several military maneuvers threateningly close to Taiwan in connection with the first democratic presidential election in Taiwan in 1996. Instead of discouraging the Taiwanese from voting on Lee, the military threats led to him gaining 54 percent of the vote and a strengthened position. After the election, the Chinese regime embarked on a more peaceful line, but the war of words escalated since Lee 1999 talked about the mainland-Taiwan relationship as a special form of state-to-state relationship.

In the 2000 presidential election, the Nationalist Party’s long holding of power was broken, and the Democratic Progressive Party (DFP) Chen Shui-bian became new president, something that was not welcomed by the Chinese regime, when the DFP previously spoke for an independent Taiwan. In early 2002, Taiwan joined the World Trade Organization (WTO), a few weeks after the People’s Republic of China gained entry into this organization. During Chen Shui-bian’s reign as president, the political relations between Taiwan and China remained tense. But after the Nationalist Party candidate Ma Ying-jeou won the presidential election in 2008, relations with China improved and a number of agreements were concluded on increased relations.

DFP regained power in 2016 through victories in both the parliamentary and presidential elections. Tsai Ing-wen became the country’s first female head of state and was re-elected in 2020. Although she took a more moderate line on the issue of Taiwan’s relationship with mainland China than Chen Shui-bian, the relationship with Beijing again became more tense. Tsai has dismissed the Chinese demand for Taiwan to be returned to China on the principle of “one country, two systems”, an attitude that supports the majority of the country’s population. In 2019, Taiwan became the first Asian country to approve same-sex marriage, a right that the country’s constitutional court ruled in 2017.

History of Taiwan
Tagged on: Taiwan