The area that constitutes Tanzania today was one of the earliest populated in human history, and along the coast it has long been an active trading activity, including with Arabs. The area was later exposed to rivalries between Arabs, Portuguese, Germans and British, and became a British mandate area after the First World War.

The country, then called Tanganyika, became independent in 1961, and Julius Nyerere became president. Nyerere led a failed socialist policy, but led the country until 1985. The question of the island of Zanzibar’s degree of autonomy or independence has been an important theme in Tanzania’s politics. 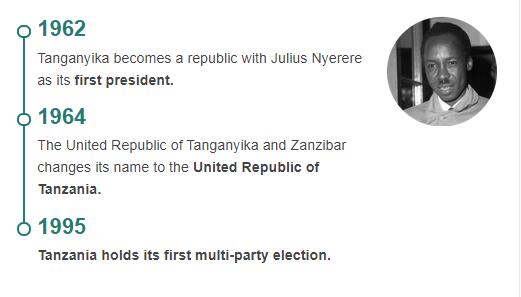 Some of the oldest fossil finds of the hominids, human early ancestors, are made in the Olduva Valley in northwestern Tanzania. Olduvai is called the cradle of humanity. The oldest fossils of hominids are from the species australopithecus afarensis, and are between 3.6 and 3.8 million years old. In 1978, Mary Leakey discovered the oldest footprints found after hominids. Imprinted in volcanic ash 3.7 million years ago, it is the oldest evidence of upright walking in human ancestors. A number of Iron Age discoveries have also been made across much of East Africa. To see more information other than history, please visit Abbreviationfinder to learn more about climate, population, government, and economy for the country of Tanzania.

Historians assume that the area that is today Tanzania was populated by Khoisan people 10,000 years ago. Between 3,000 and 6,000 years ago, Kushite peoples came from the north and brought with them agricultural technology. Today’s Tanzanian population is descended from Bantu- speaking people who moved to this area from the north, probably at the beginning of our era. The Khoisan people were gradually absorbed into the new peoples. Most bantu lived in small and scattered communities, but there were also more organized states on Lake Victoria and Tanganyika, especially from the beginning of the 17th century. Until the 18th century, these were isolated from the people on the coast. The hinterland was populated by a number of ethnic groups that took shape from the middle of the second millennium, contributing to political and social organization. Most were farmers who also farmed livestock.

It is the history of Tanzania’s coastal areas that is best documented, a history that is largely characterized by trade across the Indian Ocean, long dominated by Arabs and, in part, Persians, who traded along the coast of East Africa as early as 2000 years ago, then with European participation. The population converted to Islam, and traded inland and lands around the Indian Ocean.

Along this part of the East African coast, Swahili culture developed as a separate civilization in the period from the 1100s to the 1400s – when it lost its independence as a result of European colonialism. Construction of the characteristic stone towns (stonetowns) along the coast started from the 10th century. Swahili is heavily influenced by Arab culture, after centuries of trade contact between Arabia and the coast of East Africa. There was also early contact with Persia and India. The later Kenyan islands of Lamu and Manda, and the Tanzanian Pemba and Zanzibar were central to the trade and development of Swahili culture.

The Arabs gave part of the East African coast, which also includes today’s Tanzania, the name Zanj, where the Arab trade was concentrated. Among the most important commodities were slaves and gold. Zanj was also used to designate the people who lived along the coast and on several of the islands of the Indian Ocean. From the 600s, the coastlines were seriously included in international trade, and Arab seafaring merchants established trading stations, from which the country was influenced by Arab culture and religion. Arabs and Persians brought Islam to the area. The development of trade provided the basis for the establishment of larger urban communities. One of the commercial city states that grew up on the coast was Kilwa, which was established by Arabs and Persians in the 9th century and became one of the foremost centers of regional trade. Kilwa is an example of an administrative center for Muslim dynasties and small states, of which there were several along the coast.

The Arab trade, and much of the trade whatsoever, was destroyed after the Portuguese invasion of the 16th century. The Arabs, led by the Sultan of Oman, drove the Portuguese away again in the 18th century. Zanzibar was subject to the Sultanate of Oman from 1698, and the Sultan moved his capital and took his seat there in 1830. Both Zanzibar and Kilwa became important trading centers, including exports of slaves and ivory. Slaves were used as labor on the large plantations that were created. Unlike the West African slave trade, where the slaves were transported to the Caribbean and the American continent, most of the slaves sold in the Zanzibar slave market ended up on plantations in the region.

The slave trade was mainly run by Arabs, but with strong European interests; French from 1776. The Arab slave traders helped make parts of the interior known, including by reaching the Nyamwezi kingdom in 1825, and from there to Lake Tanganyika, where Tabora (Kazé) and Ujiji became renowned trading centers. Subsequently, British missionaries and explorers, including Richard Burton, John Speke and David Livingstone, entered the country from the 1840s and 1850s. After no one had heard from Livingstone for several years, American journalist and adventurer Henry Morton Stanley left looking for Livingstone, among other things. Stanley found the missionary on the shores of Lake Tanganyika. When they met, Stanley must have uttered the famous words “Dr. Livingstone, I suppose? ”.

The division of the European powers into Africa led Germany to join Tanganyika, the mainland part of today’s Tanzania, together with present-day Burundi and Rwanda, as a protectorate in 1885. It was established in support of the German East African Company, which was close to being cast. out of the country during an African-Arab uprising in 1888. That led the German government to take over direct control in 1891. Resistance to the German occupation continued until 1898, when the hehe people and resistance leader Mkwawa were killed.

Zanzibar came under British rule in 1890. The colonial power imposed on local people taxes and fees that forced them into a monetary economy and to grow export goods according to Europe’s needs, primarily cotton. The population revolted (the Maji Maji rebellion) in 1905-1906 in protest of the repression, but this was turned down. The rebellion, along with hunger, caused at least 75,000 Africans to perish. Germany’s defeat in World War I led to Tanganyika by the League of Nations was conferred the UK that mandate.

The first political organization among Africans was through the formation of the Tanganyika African Association (TAA) in 1929. This led to the founding of the nationalist movement Tanganyika African National Union (TANU) in 1954, from its inception led by Julius Nyerere. TANU won the first elections in the country’s history, held in 1958-1960, prior to independence.

Tanganyika became independent on December 9, 1961 with Julius Nyerere as prime minister; the following year, the country Republic and Nyerere were elected president. In 1963, TANU was made the only permitted party. An army rebellion in 1964 was turned down with British aid. The island state of Zanzibar became independent on December 10, 1963, and on April 26, 1964, the two countries established a union called Tanzania. Julius Nyerere became President of the United Republic, while Zanzibar’s President, Abeid Karume, became Vice President. Zanzibar maintained internal self-government, which has continued ever since. Karume ruled the island with a hard hand and was killed in an attack in 1972, after which Aboud Jumbe took over.

In 1967, TANU adopted a new and far-reaching political and economic program, known as the Arusha Declaration. It drew up the strategy to transform Tanzania into a socialist country, including through the nationalization of banks and business and the creation of collective ujamaa -villages, and gained significance far beyond Tanzania’s own borders. The idea of ​​the ujamaa villages was to bring people together, and to facilitate and streamline the high priority development of social services in the health and education sector. This part of the program was stepped up in the years 1974-1996, when a large-scale relocation took place, not infrequently under duress. The rapid implementation of the ujamaa program led to a decline in agricultural production and significant social problems. In hindsight, the high pace and coercive element appear to be among the main reasons why Nyereera’s ujamaa policy is far from failing.

In 1977, TANU merged with the Afro-Shirazi party in Zanzibar to Chama cha Mapinduzi (Tanzania’s revolutionary party, CCM). Nyerere was re-elected as the country’s president at five-year intervals, the last time in 1980. Prior to the 1985 election, he ran for his own preferred successor, Ali Hassan Mwinyi, then-president of Zanzibar, who was elected without a counter-candidate and re-elected in 1990. New President of Zanzibar, and Vice President of Tanzania, Idris Abdul Wakil became. Nyerere continued as head of CCM until 1990.

Like several other African countries, Tanzania changed the constitution and introduced a multiparty system in the early 1990s. Several parties took part in the elections in the fall of 1995. As President of Zanzibar – and thus the Vice President of the Union – CCM’s Salmin Amour was elected against Seif Shariff Hamad of the Civic United Front (CUF). CCM gained 26 seats in Zanzibar parliament, CUF 24. On the mainland CCM got a clear majority. CCM’s Benjamin W. Mkapa won the presidential election. The tricky victory at Zanzibar/Pemba led to increased political opposition between CCM and CUF, and the conflict developed throughout the 1990s and early 2000s. CCM reaffirmed its strong position during the 2005 elections, and the party’s candidate Jakaya Kikwete was elected President of Mkapa. In Zanzibar, Karume was re-elected, and CCM again won a majority in the Zanzibar parliament. Prior to the election, there was a violent clash between supporters of the two parties.

In the 1990s, there was a growing demand for independence for Zanzibar, and this was a key issue during the 1995 elections. Zanzibar is mainly Muslim, while Christianity is stronger on the mainland, and there are fears that fundamentalist Islamic ideas will take root and further create a divide between the mainland and the islands. The discontent in Zanzibar is largely due to the islands finding that they receive too little proportion of Tanzania’s development assistance. In addition, Zanzibar has traditionally accounted for a significant portion of Tanzania’s export revenue through its spice production.

In April 1998, a bomb exploded at the US embassy in Dar es Salaam, with a similar attack in Nairobi; Eleven people were killed, 86 injured. The attack was linked to al-Qaeda.

History of Tanzania
Tagged on: Tanzania