Thailand’s story begins in the 700s CE., When the Thai people, who originally lived in south China, emigrated to Thailand. Around 1250, the first Thai kingdoms emerged. In the 15th century, the Thai kingdom of Ayutthaya ruled central Thailand. There were constant border wars with the Burmese, and in 1767 Burma conquered the kingdom and destroyed Ayutthaya, but the Thais quickly freed themselves and founded a new state.

In the period 1850-1900, Thailand gradually gained a monetary economy and the feudal system was gradually phased out. In 1872, the current dynasty, the Chakri Dynasty, came to power and two years later became a monarchy based in Bangkok. Thailand is the only country in Southeast Asia that has avoided European colonial rule.

Slavery was abolished in 1905, and many freed slaves became rice farmers. The monarchy was abolished after a coup in 1932. Thailand was given a constitution and later mostly had military governments with dictatorial power. Thailand was allied with Japan in 1941–1945 during World War II. After the war, the country was especially attached to the United States, which in the 1950s established bases in the country. In 1949, the country changed its name from Siam to Thailand.

Strong industrial development and rising tourism after the war gave Thailand significant economic growth as well as the emergence of a politically conscious middle class. Democracy was introduced in 1992. The country was hit by a crisis in the financial sector in the late 1990s. To see more information other than history, please visit Abbreviationfinder to learn more about climate, population, government, and economy for the country of Thailand. 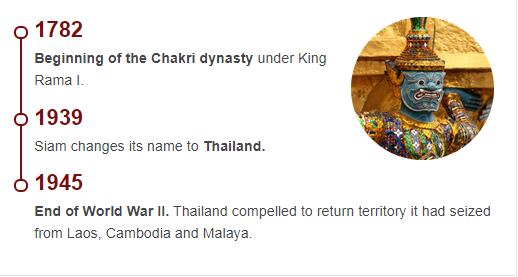 The Thai people have lived in ancient times in the southern parts of China, from where they gradually spread in a southerly and easterly direction to Vietnam, Laos, Thailand, the Shan states of Myanmar and Assam. This migration, which began in the 700s CE., Intensified as the Mongols invaded China in the 1200s.

Around 1250, the first Thai-dominated kingdoms of northern Thailand appear in the cities of Chiang Saen, Chiang Mai and Sukhothai. The latter city is considered Thailand’s first capital. The first known inscription with the Thai alphabet was written by King Ramkhamhaeng of Sukhothai in 1293.

During the Sukhothai period, which lasted until 1350, the first envoys were sent to the Chinese emperor to formally submit to him as vassal. At this time, the mighty Khmer kingdom showed signs of inner weakness. A new Thai kingdom emerged in 1350 in Ayutthaya in central Thailand. Ayutthaya expanded rapidly, leaving the surrounding areas – including Sukhothai – as vassals. In the 15th century, Ayutthaya ruled the entire central part of Thailand.

The period up to 1550 was marked by constant wars with Chiang Mai and several vain attempts to subjugate the Khmer Empire (Cambodia), though Angkor was captured several times. Ayuthia was strongly influenced by the Khmer civilization, especially in religion, administration and law, but also in languages ​​and literature.

However, the influence was by no means one-sided. Southeast Asia was underpopulated during this period, and the wars were not initially aimed at land grabs, but at conquering people. The winning party always brought as many prisoners of war as possible back to the motherland. This led to an extensive ethnic, linguistic and cultural mix of the many peoples of the area.

During the Ayuthia period, the so-called sakdina system was developed – a social order that was characteristic of Thailand until the mid-1800s. The monarchical and divine king owned all land, appointed all officials, and granted them a certain amount of land with peasants and slaves. These unpaid officials collected taxes and fees, and forced the peasants into forced labor – usually six months a year – and military service in wartime. The king had a monopoly on trade, transport and various forms of production. Any person who did not agree with this system was lawless. It was also important to the king that no hereditary aristocracy develop.

The first Europeans – Portuguese – came to Thailand in the early 16th century. From about 1550, Thailand waged constant wars with Myanmar. In the 1600s, the number of traders from England and the Netherlands increased, but under King Narai (1657–1688) the Europeans were forced out, and the country closed to Western influence, a situation that lasted until the mid-1800s.

In 1767 the Burmese invaded and destroyed the capital Ayuthia. The same year, General Taksin, who was of Chinese descent, got an army and drove the Burmese out of the country. He was crowned king and built a new capital in Thonburi (vis-a-vis Bangkok). When Taksin showed signs of insanity, he was executed in 1782. The successor, General Chakri, is known as Rama 1. He moved the capital to Bangkok and founded the present Chakri dynasty.

Pressure from the colonial powers

The period up to about 1850 was a cultural flourishing period, with Thailand remaining relatively isolated from the outside world. But pressure from the colonial powers increased, and in 1855 Thailand had to enter into an agreement with Britain, which opened the country for trade. It was followed in the next few years by similar agreements with other European powers. The result was that the home industry was outperformed; the population became more dependent on imported goods, which in turn accelerated the development of the monetary economy. In addition, the state received less revenue.

These economic changes accelerated the liquidation of the federal social system. The unpopular hovering work was abolished, more and more slaves gradually gained their freedom and in 1905 slavery was completely abolished. The freed slaves started new cultivation, and rice exports increased strongly around 1900. Relations with France were tense, and in 1907 Thailand had to leave areas on the border with Laos and Cambodia. However, both the United Kingdom and France wanted to preserve Thailand as a buffer state, and the country thus avoided being directly colonized.

External pressure also made it necessary to gain better control of the peripheral areas of Thailand, where local rulers often ruled with almost unlimited power. The administration was reorganized and centralized, and the communications expanded, initially the railway. In 1874, the northern Thai kingdoms of Chiang Mai, Lamphun and Phrae came directly under Bangkok’s control for the first time.

The monarchy is abolished

Industrialization began around 1900, but developed very slowly. In 1932, the monarchy was abolished by a bloodless coup, led by a group of Western-educated civilians and officers. The monarchy was maintained, but in the first constitution (1932) a elected parliament was made the country’s supreme authority.

However, the constitutional period thus initiated has not led to democratic conditions, but has been characterized by power struggles between different interest groups within the ruling class. This resulted in a large number of government changes – most after military coups – and many more or less undemocratic constitutions.

Thus, from 1932, only for a short period of time was civil, parliamentary rule; the rest has been military dictatorship. Moreover, almost all the constitutions divided the parliament into two chambers, one of which is appointed by the rulers, and in reality the popular powers never had any real influence. In addition, laws and decrees such as limited freedom of speech, assembly and organization, as well as the extensive political violence.

During World War II, Thailand allied with Japan, which used the country as a starting point for attacks on Malaya and Myanmar. In January 1942, Thailand declared war on the Western powers.

In 1946, Thailand was granted peace against relinquishing the areas of Laos and Kampuchea that the country had received from the Japanese. The United Kingdom and France made substantial claims for war damages, but, following pressure from the United States, these requirements were reduced. There was formed a pro-allied unity government. King Ananda Mahidol was found shot in 1946 under unclear circumstances. He was followed by his brother Bhumibol Adulyadej.

Alliance with the United States

In the early 1950s, Thailand entered into a close partnership with the United States, providing significant financial, civilian and military assistance to the country. Thailand embarked on a strong anti-communist line, and in 1950 sent troops to Korea. Thailand joined SEATO in 1954.

After 1950, industrial development began in earnest, and the 1960s were characterized by economic upswing, both due to a very liberal policy towards foreign investment and a number of US bases, from which most of the bombings of Vietnam, Laos and Cambodia were made.

In 1969, the United States had 48,000 men permanently stationed in Thailand. Thailand sent 12,000 troops to South Vietnam. An illegal communist resistance movement waged armed struggle with considerable progress in the 1970s, but ebbed towards the end of the 1980s. Relations with Vietnam were tense after the Vietnamese invasion of Cambodia, and there was a rift between forces from the two countries in the border zone.

Thailand has been criticized because of the border trade that went on for many years between Thai interests and the Red Khmer, which smuggled timber and gems from their areas in Cambodia.

Domestic politics was characterized by a series of military coups after the Second World War. In 1973, however, Marshal Thanom Kittikachorn’s military regime was overthrown during bloody student unrest. A civil government introduced democratic reforms. The reaction came with new military coups in 1976 and 1977. In 1978, Thailand’s 13th Constitution was announced. It meant that the Senate should be appointed by the King on the advice of the Prime Minister, which would ensure military control. However, the House of Representatives, Parliament, should be elected by universal suffrage.

Thailand’s political parties have been built around certain well-known people. Most have lacked ideological programs, but have generally had a conservative feel. General Prem Tinsulanonda became prime minister in 1980 and then led a civilian government until 1988.

A bloodless military coup against Chatichai Choonhavan’s government in February 1991 created tensions which in May 1992 gave rise to bloody riots in Bangkok. After the March general election was won by a military-friendly coalition, General Suchinda Kraprayoon was appointed prime minister, although he was not elected. Nearly 100 were killed as soldiers opened fire on hundreds of thousands demonstrating to a civil, democratic government.

The massacre inflicted a loss of prestige on the military, weakening their dominant position in society. During the crisis, King Bhumibol Adulyadej intervened and ordered the parties to find a peaceful solution. By a constitutional amendment, it was stipulated that the Chief Minister should hereafter be appointed from the circle of elected representatives.

Changing alliances then had power throughout the 1990s. The trend was towards greater safeguarding of a democratic form of government, but the elections were partly disturbed by violence and partly by extensive voting. A politically conscious middle class emerged in the 1990s, especially in Bangkok, where economic growth has been concentrated. This relatively new group, together with the traditionally pro-democracy students, are the strongest drivers of democracy.

Thailand’s historical sources consist of inscriptions, palm leaf manuscripts and – since the mid-1800s – printed books; To this must be added European travelogues.

The traditional chronicles are of two main types: tamnan, which is religiously oriented and links Thai history to a further Buddhist tradition, and phongsawadan, which provides a chronological review of historical events and concentrates on the king’s person, succession and relations with the vassals and neighboring states.. Common to these two traditions is that they provide little information about the social structure and social, economic and cultural conditions. This information can be partially sought in law collections. European travel descriptions exist from the 1600s, to a greater extent only from the 1800s.

History of Thailand
Tagged on: Thailand