Findings of carved figures in stone testify that the northern parts of the country were inhabited in prehistoric times, and finds of iron production at Bassar in the north of the country document early social organization. Iron utilization in sub- Saharan Africa contributed to the development of specialization, trade and social differentiation.

The country’s pre-colonial history is particularly linked to the migrations and state formation around today’s Togo; partly the great kingdoms of the north, including Mossi and Songhai, as well as the dominant peoples of the west, such as Ashanti, and in the east, like Yoruba. Known from the 16th century is Tyokosi, a mercenary from the men, who operated in the north of the country. One of the best-known state formation in Togo was Dagomba in the north. Of great significance was also the ewe people’s migration from its original abode at Notsie in today’s Togo to areas that also include modern Ghana. Today’s settlement in the border areas between Ghana and Togo took place between 1500 and 1800, leading to an even dominance in much of the southern areas. To see more information other than history, please visit Abbreviationfinder to learn more about climate, population, government, and economy for the country of Togo.

Togo was to some extent included in the economic development of the Guinea coast, which was dominated by local states – and later European colonies – in today’s Ghana, Benin and Nigeria. The trade, which was equally active, took place partly within the region, and consisted not least of coal nuts and gold; Salt recovery was also of great economic importance. Salt was also a commodity, and trade came about as European interests settled along the coast from the 16th century, with a boom in the 17th century. The Gold Coast, later Ghana, was the center of the triangle trade between West Africa, the Caribbean and Europe, where the most important commodities extracted from West Africa were gold,ivory and slaves. While Ghana led the extraction and export of gold, slaves were exported from a larger area, but to a large extent through trading stations on the Gold Coast. A stretch east of the Gold Coast, including present-day Togo, was named the Slave Coast in the 1600s because of the extensive human trafficking here – and which dominated foreign trade from the mid-1600s. Slave trade was banned in 1885. 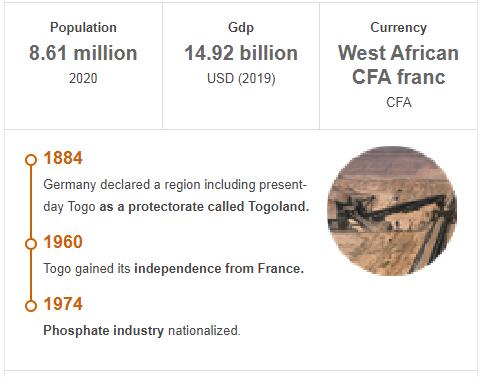 The European influence along the Guinea coast was particularly evident from the 16th century, after Portuguese seafarers first anchored on the coast of modern Ghana in 1471. Several European states set up trading stations that eventually evolved into slave shipping centers. Among these were Denmark, and Danish interests also established themselves in today’s Togo. It was not until 1850 that Denmark sold its interests in the Keta area to the United Kingdom.

In the 19th century, European colonial powers divided the coast, and in Togo there was an opening between the British-controlled Gold Coast and the French-controlled Dahomey. This was exploited by Germany, which wanted to secure colonies in Africa. The German influence increased, first through a mission from 1847, then trade. A German envoy, Gustav Nachtigal, signed agreements with local chieftains in 1884, including Mlapa 3 for the village of Togo, which named the colony – just days before a British representative came in the same case. Germany won the race, and Togoland was recognized as a German protectorate in 1885. The German colonization of the inland took seriously until around 1890 and was met with widespread opposition from the local population, especially the dagomba and the concomba. A major uprising occurred in 1897–98, but this was turned down. By agreement with the United Kingdom, parts of today’s Ghana were incorporated into German Togoland in 1890.

Lomé was elected capital in 1897, and Togo was developed and highlighted as Germany’s design colony, with extensive rail and port development and increased agricultural production. It was created plantations, including for cotton cultivation, to reduce Germany’s dependence on imports from the United States. In order to achieve these results, the colonial power began to use forced labor on the indigenous population, which was also heavily taxed. While the Germans invested heavily in modern infrastructure, which promoted economic production and trade, little was spent on social services for the population. Many Togolese went to the Gold Coast for education, others to escape German repression.

During World War I, British and French forces entered Togoland from the Gold Coast and Dahomey in 1914, driving the Germans out of the colony. After the war, it became a mandate under the League of Nations, with shared responsibility between France and the United Kingdom: the eastern part was governed by French rule and partly ruled with Dahomey (today’s Benin), the western part became British and incorporated into the Gold Coast (today’s Ghana). This division divided the Ewe people between two colonial powers, and later two independent states: Ghana and Togo. A referendum in British Togoland in 1956, the population there wanted integration in the Gold Coast (Ghana), while the French Togoland voted to become a self-governing unit within the French Commonwealth.

Togo gained internal autonomy in 1956, with Nicolas Grunitzky as prime minister. After the 1958 election, he was succeeded by Sylvanus Olympio, who was prime minister when Togo became independent on April 27, 1960; in 1961 he was elected the country’s first president. Olympio was killed in a coup, led by Sergeant (later General) Gnassingbe Eyadéma, in 1963. Grunitzky was invited back from his exile in France, and a referendum gave him the presidential post. In 1967, Eyadéma, now the Chief of Defense, carried out a new coup, taking over power and the presidential office himself. Eyadéma abolished all political parties, but declared that he would reinstate civilian rule. In 1969, Eyadéma formed a new party, the only allowed Rassemblement du Peuple Togolais (RPT). A personal cult was built around Eyadéma, which was re-elected in 1972, 1979, 1986, 1993, 1998 and 2003.

A democratization process began in 1991, when more party systems were introduced and a national conference was held with the participation of a number of organizations. Developments in the first half of the 1990s were marked by political turmoil, with several clashes between protesters and police. After army groups attacked a military camp in Eyadéma in 1993, approx. 240,000 to neighboring countries.

The opposition boycotted several of the 1990s elections, but during the 1998 presidential election, Eyadéma was challenged by Gilchrist Olympio of the Union des forces de changement (UFC). Eyadéma won, but the result was contested by the opposition, after the counting was canceled and not completed until Eyadéma was declared the winner. In August 1998, military posts and a police station at the border with Ghana were attacked, and Ghana assisted Togolese authorities in restoring peace. In 1999, Amnesty International presented a report that strongly criticized human rights violations in Togo, killing hundreds of political opponents of the regime. The political repression caused the EU to cease its financial assistance to Togo in 1993.

A constitutional crisis occurred when Eyadéma died of heart failure in February 2005. The army, with the support of parliament, deployed his son, Faure Gnassingbé, as head of state, in violation of the Constitution. The African Union (AU) characterized this as a military coup, and both the AU and the West African cooperation organization ECOWAS imposed sanctions on Togo. As a result of national and international protest, Gnassingbé resigned at the end of February, and then voted for RPT – and a majority. The foremost opponent, Emmanuel Bob-Akitani of the Union des forces de changement (UFC), declared himself the winner, and riots came to the capital when the result was announced. According to official figures, 154 were killed; a UN report set the figure to between 400 and 500.

Togo’s relationship with neighboring Ghana is especially due to colonial history; part of the German colony Togoland, in a 1956 referendum, chose to join Ghana over the upcoming independent state of Togo. The Ewe people are thus split between the two neighboring states, but have close contact, including in the form of illegal trade. The Togo-Ghana relationship has been difficult for many years, and the border has been closed for several periods, including 1994, following a failed coup attempt that Eyadéma blamed on Ghana for complicity. Togo has a close relationship with France, although it was strained in the early 1990s as a result of inadequate democratic practice in Togo. After a coup attempt in 1987, France and Zaire (now DR Congo) sent) soldiers for Togo. Togo also has a close relationship with Germany.

History of Togo
Tagged on: Togo