Turkmenistan was an important hub on the caravan road between Europe and China, often called the Silk Road, which was in use as early as the 100s. Various dominions have prevailed in the region, and the country has become accustomed to the cultural and economic influence of external actors. The Russian Empire annexed Turkmenistan in 1884, and the country was a Soviet Republic from 1924. Turkmenistan became independent in 1991 following the dissolution of the Soviet Union.

Former President Saparmurad Nijazov, often called Turkmenbashi, ruled from 1991 until his death in 2006. He established one of the world’s strictest dictatorship regimes and led an extreme nationalist policy. Although Turkmenistan has become less isolated after Gurbanguly Berdymukhamedov took over as president, the country remains a totalitarian regime characterized by censorship and serious human rights violations. 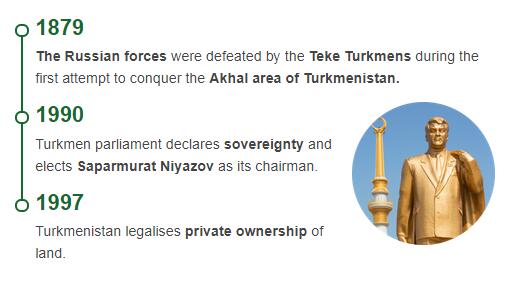 In ancient times and the early Middle Ages, present-day Turkmenistan was included in the various Iranian state formations, the Hellenistic kingdoms (conquered by Alexander the Great in 329 BCE), the Kushana kingdom and the Heftalid kingdoms. From the mid-500s onward, Turkish tribes invaded, seized the land and assimilated the local Iranian-speaking population. The whole area was conquered in the 600s by the Arabs, who made the city of Merv (now Mary), which had been the seat of a satrapi during Dareios 1, the capital of Khorasan. The Arabs used the city of Merv as their starting point for Islamic expansion into Transoxania. To see more information other than history, please visit Abbreviationfinder to learn more about climate, population, government, and economy for the country of Turkmenistan.

In the 800- to 1000-century it was a time of prosperity for cities and agriculture in the oasis districts, but Turkmenistan was thoroughly devastated by Genghis Khan in the period 1219-1220, and came after his death under the Golden Horde khanate. From about 1460 to 1500, the land was divided between the Timurids, the Uzbek Khans of Khiva and Bukhara, and Persia.

From the middle of the 19th century, the Russians began to assert themselves in the area. In 1869, Russian army divisions founded Krasnovodsk on the Caspian Sea, and in 1874 a Trans- Caspian military circuit was established in the adjoining district. In 1881, part of the later Turkmenistan was organized in a civilian Transcaspic administration area, while the rest of the country was still under Khans in Khiva and Bukhara.

After the Bolshevik Revolution (October Revolution) in 1917, Turkmenistan was part of the Turkestan Autonomous Republic from 1918 to 1924, until in 1924 a separate Turkmen Union Republic was established within the Soviet Union.

For centuries, the Turkmen had been divided into numerous tribes and clans, and until the revolution in Russia most had also been hereditary, although many had settled in the oases and become farmers in the 18th and 19th centuries. Tribal organization and tribal loyalty were strong. They had generations of experience as warriors, and it was customary to hire as soldiers with the various rulers of neighboring countries. The establishment of the Turkmen Soviet Republic came – although met with fierce opposition – to give the Turkmen greater national unity and sense of being a people.

The anti-corruption campaign in the Soviet Union in 1986-1987 revealed several serious conditions in Turkmenistan, and both the President and the Vice President of the Republic had to step down. Some cases of dissatisfaction and nationalist demonstrations occurred until 1990, but to a much lesser extent than in the other Soviet republics. Following the election of Turkmenistan’s Supreme Soviet in the winter of 1990, the Republic’s party leader, Saparmurad Nijazov, was elected president. In August, the Supreme Soviet adopted a declaration of sovereignty, and in October an executive presidential office was introduced and Nijazov was elected president by direct election without a candidate.

As in the other Central Asian republics, Turkmenistan had a large turnout and an overwhelming yes majority in the referendum on a new union agreement in March 1991. The failed coup d’état in August 1991 left the republic’s leadership passive, and the events had no consequences for President Nijazov. In a referendum in October, over 90 percent voted for independence and supported the president’s policies.

On October 27, 1991, Turkmenistan’s supreme Soviet Republic declared independence and made decisions that prepared the establishment of its own defense and introduction of its own currency. From the beginning, the country became a member of the Commonwealth of Independent States.

Nijazov was elected president of the new state in 1992 with 99.5 percent of the vote – officially – and had his term extended to 2002 by a referendum in 1994., Democratic Party, has all 50 seats. In 2002, however, he stated that he will retire in 2010, after turning 70 years. In the same year, he escaped unharmed from it when the president’s motor card was shot in the capital Ashgabat. Nijazov accused opposition leaders, who mostly live in exile in Moscow, of hiring mercenaries to kill him.

Under the dictatorial rule, all opposition was strictly prohibited. Nijazov appeared in the propaganda as a national father figure; from 1993 he received the official honorary title Turkmenbashi (“Turkmen’s father”). When he became president, he ordered that electricity, gas and water, later also bread, should be given free of charge to all the inhabitants, which contributed popular popularity. The person cult was extreme; Among other things, three of the months of the year were named after himself, his mother and his spiritual guide. In the capital, the country’s tallest building was erected, the 75-meter-high neutrality arch, crowned by a 12-meter-high gold-plated statue of Turkmenbashi. The statue of the president was lit at night and slowly rotated after the sun, until the monument was dismantled and moved out of the city center in 2010.

Nijazov died in December 2006 and was followed by Kurbanguly Berdymuhamedov, who declared that he would follow Nijazov’s line. His appearance is nevertheless described as somewhat more moderate. Among other things, Berdymuhamedov has sought to improve the country’s health care system and school system.

In foreign policy, Nijazov’s slogan was “positive neutrality”. Although Islamic fundamentalism has not gained a foothold in Turkmenistan, he had good relations with the Taliban regime in Afghanistan. Unlike other Central Asian countries, Nijazov refused to actively support the US-led forces in the war against the Taliban.

Turkmenistan, however, has oriented itself also against the West, and became in 1994 the first Central Asian country that joined NATO’s partnership program Partnership for Peace. Relations with Russia are complicated. In 1999, Turkmenistan broke a cooperation agreement with Russia and introduced a visa requirement for citizens of the USSR. However, Nijazov remained firm in defense cooperation with Russia, and Russian troops participate in the guard along the borders of Afghanistan and Iran. Turkmenistan’s own defense is under construction, and plans include a naval force in the Caspian Sea.