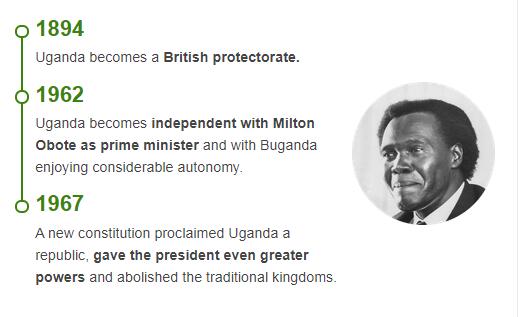 For the past half millennium, Nilotic and Sudanese peoples (among them acholi, luo and langi) have immigrated to Uganda and settled together with Bantu speakers (for example, ganda and nyoro). In the area between the Central African lakes, the kingdom emerged with well-developed social and political organization. The foremost of these was until about 1800 Bunyoro on Lake Albert, after which BugandaLake Victoria took over as the region’s leading power, mainly because the caravan trade from the Indian Ocean then reached there and gave the Ganda kings (kabaka) firearms, among other things. At the same time, the Islamic influence grew. As a counterbalance to this and as protection against Egyptian expansion south in the 1870s, kabaka welcomed Mutesa I European explorers such as Henry Morton Stanley, as well as British Protestant and French Catholic missions.

The rivalry between Muslims and Christians and between Christians intensified in the 1880s and 1990s to civil war, complicated by the fact that German and British colonial interests interfered in the game. Through a British-German settlement in 1890, Uganda became a British area of ​​interest. As a representative of a British colonization company, Captain Frederick Lugard (1858–1945) signed a protection agreement with Buganda, then with the smaller kingdoms of Ankole and Toro. In 1894, the British Crown took over the protectorate. With peaceful or military means, it was then extended to the whole of present-day Uganda. Bunyoro, who resisted, was crushed and truncated in favor of Buganda, who was favored by the British as most developed and cooperative.

The colonial power’s foremost development efforts after 1900 were the railway construction – largely with Indian labor – and the introduction of cotton cultivation, soon Uganda’s foremost export industry. After World War I, the country’s commerce and industry became increasingly dominated by Indian entrepreneurs; however, European immigration was not favored. In 1921, the Legislative Council established Europeans and Indians, but not Africans, whose affairs were governed by traditional African institutions (kings, councils, village heads) according to the principles of indirect rule. Above all, Buganda’s “feudal” control system was left intact. To see more information other than history, please visit Abbreviationfinder to learn more about climate, population, government, and economy for the country of Uganda.

This is the main reason why Uganda only very recently got some nationwide African independence movement. The parties that emerged in the 1950s were only locally rooted or represented special interests, such as the predominantly Catholic Democratic Party. In 1960, however, Milton Obote (who belonged to the Lango people in northern Uganda) formed the Uganda People’s Congress, which was supported by both Protestants and Muslims. By entering into an alliance with a purely ganda party (Kabaka Yekka, ‘Kabaka only’), he won the elections in 1962. When Uganda gained full independence that year, he became prime minister under a federal constitution that gave Buganda broad self-determination. Uganda’s first president was Kabakan Mutesa II.

Obote sought a socialist one-party state and therefore soon came into conflict with Buganda. In 1966 he exiled Mutesa, made himself president, abolished the kingdoms of Uganda and imprisoned opposition members of his own government. At first he had the support of the army, but as he increasingly relied on members of his own people, he was deposed in 1971 by a coup, led by army chief Idi Amin.

At first, Amin’s regime was popular, but it soon degenerated into grotesque military epiphany with mass executions of real or suspected opponents. Amin was a Muslim, and persecution was also directed at Christians. He expelled tens of thousands of Indians from Uganda in 1972, but for the country’s economy and administration. Foreign policy, he eventually chose a prosovetic and anti-Israeli course, but suffered a severe loss of prestige when Israeli commandos in 1976 at Entebbe Airport freed Israeli hostage (see Entebberaiden).

Amin’s unrest in 1978 caused full revolt. He tried to divert attention from the internal problems by declaring war on Tanzania, where Obote stayed in exile. The opposition in Uganda joined the Tanzanian defense forces, and Amin had to flee the country in 1979. After brief civil and military transitional governments, Obote resumed the 1980 presidential post. But Uganda was in disarray, looting soldiers terrorized the country and regional contradictions made it impossible for a unified government. Obote’s main opponent was the guerrilla movement National Resistance Army (NRA) under Yoweri Museveni (from Ankole). Revolving regular troops under Army Chief Tito Okello drove Obote into exile in 1985, but the following year the NRA took over the capital of Kampala, and Museveni became president.

He tried to bridge the ethnic contradictions, including by giving Buganda a kabaka again after almost thirty years. As a condition of democratic elections, he stated law and order in the country. In 1994, peaceful elections were held for the National Assembly, which in 1995 adopted a new constitution with statutes on a non-party system and gave some autonomy to the country’s district. Museveni won the presidential election in 1996 with just over 74 percent of the vote and was re-elected in 2001 with close to 70 percent. In 2005, multi-party systems were introduced following a referendum. In the same year, the constitution was amended so that the president can now sit an unlimited number of terms of office against the previous two. In the 2006 presidential election, Museveni received 59 percent of the vote, while the most important opponent, Kizza Besigye, received 37 percent. Before the election, Besigye was jailed, who was previously part of Museveni’s inner circle, accused of, among other things, high treason and terrorism, but he was released on time to be able to run for office. In Parliament got the president’s partyNational Resistance Movement (NRM) overwhelming majority.

Also in the 2011 and 2016 elections, Besigye was defeated by Museveni, who received 68 and 61 percent of the vote, respectively, and NRM retained its majority in parliament. Inspired by the revolutions in North Africa in early 2011, the opposition in April urged people to walk to work in protest of high food and fuel prices. The demonstrations were forcibly wounded and Besigye and other opposition leaders were repeatedly arrested and released. Besigye was also imprisoned several times in connection with the 2016 elections.

Although Uganda has experienced rapid economic growth under the leadership of Museveni and has long been cited as a role model for the rest of Africa, ethnically-based opposition to the regime has hampered the development and has gradually damaged the country’s reputation. After the NRA’s takeover of power in 1986, armed resistance continued in the northern and eastern parts, mainly through the sect-like “Holy Spirit movement”, whose members believed that holy water made them invulnerable. Towards the end of 1987, the movement had been suppressed, but surviving members regrouped in the Lord’s Resistance Army (LRA) led by Joseph Kony. The LRA, recruited mainly among the Acholi people, has given up fighting for a state formation based on the Bible’s ten commandments. However, the operations of the movement have been characterized by great brutality against civilians and forced recruitment of children. The LRA is estimated to have robbed at least 25,000 children, both boys and girls, who were forced to become soldiers or sex slaves. The regime has alternately tried to deal with the uprising with major army offensives that further aggravated the civilian population’s existence and offers of amnesty and negotiations. Towards the end of 2004, a peace agreement seemed imminent, but the negotiations were stranded at the last moment. Around 1.6 million people in northern Uganda were refugees in their own country at the beginning of 2005 because of the LRA’s terror and the fighting between the guerrillas and the army.

In 2005, the International Criminal Court (ICC) in The Hague issued arrest warrants for five of the LRA’s leaders: Joseph Kony, Vincent Otti, Okot Odhiambo, Dominic Ongwen and Raska Lukwiya, all accused of war crimes and crimes against humanity. Otti, Odhiambo and Lukwiya are dead, Ongwen was arrested in the Central African Republic in January 2015 and Kony is still (2017) free.

A year later, a ceasefire was entered into and negotiations started, but the peace agreement that the parties in 2008 agreed was never signed. Instead, Uganda, Congo (Kinshasa) and the then self-governing South Sudan attacked joint LRA mounts in Uganda. Since 2006, the LRA has not implemented any actions in Uganda, but the movement is still active in Congo (Kinshasa).

During the latter part of the 1990s, the regime was also challenged by two rebel movements in western Uganda, the Allied Democratic Front and the West Nile Bank Front. Around 2000, the army was estimated to have largely crushed these two organizations. The fighting against the guerrilla movements has disturbed Uganda’s relationship with neighboring countries Sudan and Congo (Kinshasa), where the rebels have been able to seek protection. In 2001, however, the Sudanese government suspended support for the LRA, and the following year the Ugandan army was granted permission to raid the LRA on Sudanese land. Uganda’s army took part in the 1996 invasion of what was then Zaire, which led to the overthrow of the country’s dictator Mobutu, formally, however, to fight Ugandan guerrillas.

In July 2011, the Somali Islamist movement al-Shabab conducted two suicide bombings in Kampala. The attack was said to be a revenge for Uganda sending peacekeeping troops to Somalia.

History of Uganda
Tagged on: Uganda