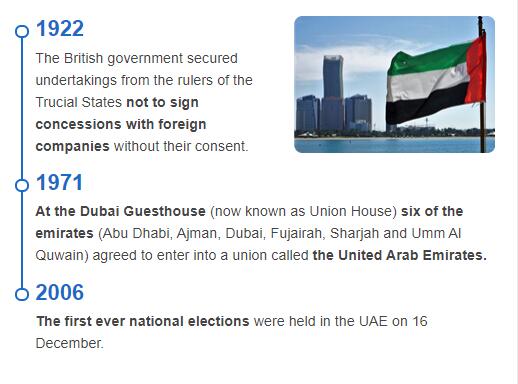 Since the Sumerian era, trade has been an important industry in the area of ​​the Persian Gulf. Until the exploitation of the oil deposits, the main industries were other fishing and pearl fishing, to some extent also agriculture (dates). The area was Islamized early. The current main cities date from the 18th century. Around 1800 began to influence the religious-political movements of the time (Wahhabism). The communities were, and are still largely, divided into clans and large families with different mutual alliances and client relationships. To see more information other than history, please visit Abbreviationfinder to learn more about climate, population, government, and economy for the country of United Arab Emirates.

Conflicts with the British East India Company and attacks against British ships led to military countermeasures (1809 and 1819). These were followed by several agreements between Britain and the various leading Sheikhs (1820, 1835, 1853, 1892, 1919 and 1937), which in practice meant that the area became a British protectorate (Trucial Oman or Trucial States). The agreements expired in 1971, when the federation came into being between six of the states. The seventh (Ras al-Khayma) joined in 1972. Bahrain and Qatar chose to stand outside. The United Arab Emirates is part of the 1981 Gulf Cooperation Council (GCC).