Before the first Spaniards arrived on the coast of what is today Uruguay, the area was populated by a modest number of nomadic Indians who came under the common name charrua. The area attracted little interest among the colonial powers. Spanish immigrants began with cattle farming in the 17th century. The area went by the name of Banda Oriental, the “East Bank” (of the Uruguay River), and formed a buffer between the Spanish viceroy of La Plata and the Portuguese colony of Brazil. In 1680, Portugal established the Sacramento colony. Spaniards founded the port city of Montevideoin 1726, and in 1776, Banda Oriental was incorporated into the Viceroy of La Plata with its headquarters in Buenos Aires. Spain controlled only the coast, while the inland was dominated by independent cattle drivers (gauchos). When Argentina became independent in 1810, the “East Bank” followed. Inland, however, gaucho leader José Gervasio Artigas had set up his own army and claimed the area in 1815. From 1817, Portugal controlled the area, then it was part of Brazil after independence in 1822. 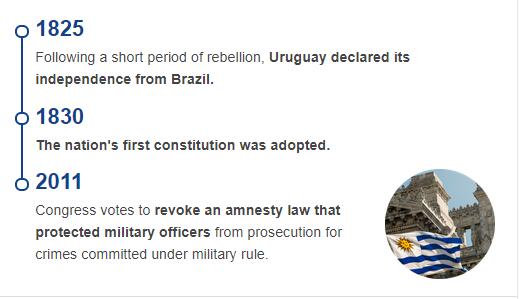 With British aid, Juan Antonio Lavalleja in 1825 equipped his own army in Buenos Aires that crossed the Río de la Plata and declared independence from Brazil. In 1828, the army controlled the entire province of Banda Oriental, and the independent republic of Uruguay was established. A peace agreement with Brazil was signed and the new republic was recognized by both Argentina and Brazil. The rivalry between Artigas’ and Lavalleja’s successors led to civil war, where the gauchos in red (colorado) and the bourgeois army in white (blanco) were the rival political parties. Colorados represented a liberal line, Blancos the Conservative bourgeoisie. The rest of the century was marked by a power struggle between them, with civil wars and coups. To see more information other than history, please visit Abbreviationfinder to learn more about climate, population, government, and economy for the country of Uruguay.

The fighting lasted until José Batlle y Ordóñez of the Colorado party was elected president in 1903. A pact between the two rival parties led the power struggle into parliamentary forms. Following the Swiss pattern, proportional political representation was introduced in 1918. Widespread social reforms were introduced, and Uruguayans received significantly higher living standards and political stability than was common in Latin America.. The women were also given considerable rights. Uruguay was a country made up almost entirely of European immigrants. The colonial structure of the colonial period that was common in Latin America developed to a small extent in Uruguay. Immigrants, especially from Italy and Spain, brought with them strong trade union traditions from Europe. The working population was concentrated in the cities, and the small industry grew in the Montevideo area. The working class was a constant challenge for the Colorado Party, which remained in power for almost a hundred years, from 1865 to 1958. Economically, however, it was the great demand for quality meat, hides and wool from the pampas that enabled Uruguay to develop into a welfare state with a very advanced teaching offering.

The Blanco Party remained in power from 1958 to 1966. From the mid-1960s, the ruling parties had to resort to support from the army to maintain control. The army therefore had considerable influence, and when Juan María Bordaberry of the Colorado Party was elected president in 1972, the army chose to exercise power on its own, inspired by Brazil’s military doctrine of national security. The army had long waged its war against the building bar Tupamaros, who fought against what they regarded as corruption and misconduct. Bordaberry accepted the role of a civilian front figure for the military regime, which has evolved into one of the most brutal Latin America known. High officers gradually took over the most important economic and political functions in the country. Extensive imprisonment and torture of oppositionists characterized the new regime. A fifth of the population traveled in exile, a large proportion of whom were intellectuals and trade unionists. In 1976, the army replaced Bordaberry with a new civilian front figure, Aparicio Méndez. In 1979, Uruguay had the highest number of political prisoners in the world relative to the population. The intelligence service also persecuted its opponents abroad. In 1980, a referendum was held in which the population rejected a new constitutional proposal that would entail institutionalization of the dictatorship.

The referendum became an important indication that the military regime had an uncertain future. As the financial problems, compounded by external debt, became burdensome in the early 1980s, the military leadership announced a gradual softening. Gregorio Álvarez, who was appointed president in 1981, was tasked with preparing for the transition to presidential and national assembly elections in 1984. The radical Frente Amplio party had done well in the last election in 1972 and was one of the reasons for the military’s great communist fear. It was therefore refused to participate in the election, but after pressure the decision was reversed. Frente Amplio received 20 percent of the vote. The election was won by the Colorado party, and in 1985 Julio María Sanguinetti took Cairolo on his first term, 1985–90.

Uruguay had incurred considerable foreign debt during the dictatorship, and in 1986 a cross-political agreement was signed to create economic stability and social development. In its first term, Sanguinetti was tasked with restoring democracy, and through a referendum in 1989, it was decided to disregard the prosecution of those responsible for gross human rights violations during the dictatorship. Later that year, a new election was held, and the Colorado party faced stiff competition from the conservative Blanco party that opposed Luis Alberto Lacalle, which emphasized widespread privatization of the economy and to keep pace with developments in the dominant neighboring countries Argentina and Brazil. Lacalle won the presidential election and initiated cuts in public spending, which supported opposition from the trade union movement and the majority in the National Assembly.

Liberalization in the 1990s

Like other countries in the southern part of the continent, liberalization led to increased investment and containment of inflation. Unemployment stabilized at 10 percent, and in the 1990s Uruguay was the only country in Latin America to boast a significant increase in its social budget, especially for the health and social care sector. In the 1994 election, the Colorado party came back strong, and Sanguinetti began his second presidential term in 1995. In 1997, the National Assembly finally approved a new constitution after it had been out of service since 1973.

The economic downturn that hit Brazil and Argentina at the turn of the year 1998/99 also had serious consequences for Uruguay, as the two neighboring countries are important trading partners. While GDP growth for the period 1992-98 averaged 4.2 percent, growth in 1999 dropped to 2 percent.

Political Left turn in the 2000s

Colorado Party candidate Jorge Batlle Ibáñez won the 1999 presidential election and took office in March 2000. He was the son of Luis Batlle Berres, who was president 1947-51 and 1955-56. The election was particularly noticeable in that the traditional two-party system was broken when socialist Tabaré Vázquez, who was running for election union Frente Amplio (Broad Front), defeated Blanco Party candidate Luis Alberto Lacalle in the first round. Batlle won the second round by a good margin, 54.1 percent against Vázquez’s 45.9. Frente Amplio also did very well in the congressional elections in the fall of 1999, and won, in the first round, the presidential elections in 2004. Vázquez’s accession in March 2005 ended the 170-year era in which the two bourgeois parties Blancoand Colorado, with the exception of the years of military dictatorship, had switched to sitting in power. Uruguay thus joined the left-leaning that characterized the entire South American continent in the first decade after the turn of the century. Frente Amplio had poverty alleviation as his foremost cause. The alliance emerged with a moderate, social-democratic profile, but also linked ties with leftist populist Hugo Chávez ‘Venezuela.

In 2002, Uruguay was once again hit by an economic crisis, again this time as a result of a crackdown in neighboring countries and Argentina’s main trading partner; the so-called tango crisis. Both the export and tourism industries were hit hard. Uruguay’s economy saw a 10 percent decline this year, which for a short period led to a social breakdown in the country traditionally referred to as “South America’s Switzerland.”

However, the following year inflation and foreign debt were under control; At the beginning of 2007, Uruguay had repaid the last part of its billion-dollar loan to the International Monetary Fund. In the same year, the capital Montevideo became the seat of the parliamentary assembly of the leading South American free trade organization Mercosur. During the financial crisis in 2008/09, the annual growth rate in Uruguay’s economy dropped from around 7 to 1.2 percent. But unemployment and the proportion of people living below the poverty line also decreased noticeably, which was attributed to the tax and benefit policy under the Frente Amplio board.

Uruguay is one of the continent’s safest countries, but emigration is a major challenge. The fact that younger, highly educated travel out and that the country has the highest proportion of older people in the western hemisphere has become an obstacle to economic development. In 2005, 20 percent of Uruguayans resided abroad.

Frente Amplio’s candidate, José Mujica, won the presidential election in November 2009 – again confirming that the old power elite’s duopoly had been broken. Mujica led the Tupamaros guerrilla in the 1980s, placing himself more in line with Brazil’s President Lula da Silva than Venezuela’s Hugo Chávez. In 2015 he was followed by Tabaré Vázquez, also from the Socialist Party Frente Amplio.

The 2019 presidential election was won by Luis Lacalle Pou of the conservative Partido Nacional. Lacalle Pou won the second round of elections against Daniel Martínez from the ruling coalition Frente Amplio. Lacalle Pou is inaugurated as President on 1.3.2020, and sits until 2025. After the 2019 election, Beatriz Argimón became the first female Vice President in Uruguay.

History of Uruguay
Tagged on: Uruguay