The area that is today Uzbekistan has throughout history been subject to several different kingdoms. In the late 1800s, Uzbekistan was conquered by Russia and most of the country was incorporated into Russian Turkestan. After the Russian Revolution, Turkestan was divided into four Soviet republics in 1924.

In 1991, Uzbekistan was proclaimed an independent state following the dissolution of the Soviet Union. The leader of the Uzbek Communist Party Islam Karimov became president.

The present-day Uzbekistan belonged to ancient and early Middle Ages during the periods of Baktria, the Persian Empire, the Greek-Bactrian Empire, and eventually the Kushan Empire, which was crushed by the Hephalites around 425 AD.

In the ruins there were small state formation, including around Bukhara and in Fergana, over which the Turkish Kaganate of the 500s secured control.

In 705–715, the Arabs conquered the area and converted the population to Islam. During the Iranian Sami- era dynasty of the 9th century, the Caliphate in Baghdad was detached and Bukhara became the capital and a major economic, cultural and scientific center. To see more information other than history, please visit Abbreviationfinder to learn more about climate, population, government, and economy for the country of Uzbekistan.

From around 1000 came the area that is today Uzbekistan under the Turkish Karakhanids, and was linguistically Turkishized at the same time as the Turkish lords turned to Islam (Sunni). In 1220–1221 the whole area was ravaged by Genghis Khan and in the 1360s by Timur Lenk. The latter founded the Timuride dynasty (1370-1507), which made Samarkand the cultural and scientific center of the kingdom.

In 1499-1500, Bukhara and Samarkand were occupied by the nomadic Uzbeks, who eventually settled down as settled peasants. The Uzbeks founded three emirates during the Shaibanid dynasty: in Khiva (Hiva), Bukhara and Kokand, and they became the dominant Turks in the region. 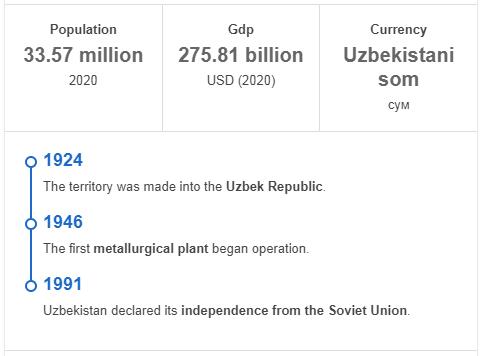 In 1865-1876, the Russian Empire conquered Uzbekistan. The Khanates of Bukhara and Khiva became protectors, while the rest of the country was directly incorporated into Russian ” Turkestan “. The Russian tsar regime made few attempts to Russianize the peoples of Turkestan. The Russians regarded the population as inorodtsy, “foreign cultural”, and partly controlled it by laws other than the rest of the population. Among other things, the Russians did not summon Turkestan inhabitants to war service when the First World War broke out. However, when the Russian authorities in 1916 chose to print “inorodtsy” for military service, this triggered a major revolt.

Russian workers at Tashkent’s factories were on the brink of the October Revolution in Uzbekistan, and were long opposed by the indigenous Uzbek people. In 1918–1923, there were fierce battles throughout the region between the Red Army and Islamic nationalists (the Basmachi movement). After the resistance was defeated, Soviet authorities divided Turkestan into ethnically defined Union republics.

The Uzbek Soviet Republic was established in 1924 and came out of the border boundaries very well. Although Tajikistan in the south was separated from Uzbekistan as a separate Union Republic in 1929, important Tajik cultural centers such as Bukhara and Samarkand remained in the Uzbek Republic. In 1936, the Karakalpakia on the banks of the Aral Sea was transferred from Russian to Uzbek jurisdiction and made an autonomous republic in the Uzbek Soviet Republic.

Uzbekistan was the only Soviet Republic in Central Asia that had large fertile areas, especially in the Fergana Valley in the east, where there was large production of citrus fruits, among other things. From the mid-1930s, however, agriculture in the Republic was increasingly converted to cotton production to make the Soviet Union independent of cotton imports. The unilateral cotton cultivation was driven by extensive use of herbicides, which has damaged the ecology of the area. It also required extensive irrigation that drained the rivers to water and contributed to an accelerating drying out of the Aral Sea.

In the 1920s, Uzbekistan was ruled by national Bolsheviks who, on the one hand, Sovietized the Republic, on the other, ensured that it retained a clear ethnic Uzbek feel. Josef Stalin condemned these leaders as right-wing deviants, and two of the Republic’s leading politicians, Faizullah Khodjaev and Akmal Ikramov, were sentenced to death during the third Moscow process in 1938.

The next generations of Uzbek leaders did not openly challenge Moscow, but still managed to secure ethnic Uzbek power in their own republics than was usual in the region. With its high population growth, Uzbekistan in the 1970s passed Kazakhstan as the most populous republic in Central Asia. As an expression of the Republic’s increasing importance in the Soviet Union, Uzbekistan’s long-standing party leader Sharaf Rasjidov was elected candidate for the Politburo in 1966.

Yurij Andropov’s anti-corruption campaign in the 1980s uncovered an extensive network of corruption in Uzbekistan with branches to Moscow. Several Uzbek leaders were sentenced to long prison sentences. In Uzbekistan, there was a widespread belief that Uzbeks were made scapegoats for conditions common in all republics.

The riots left a political void in the Republic that was filled with new people, including Islam Karimov, party secretary from 1989, and president from 1990.

During the perestroika, there was an active political opposition to the communist regime in Uzbekistan. The parties “Birlik” and “Erk” sprang from the secularized intelligentsia, but also the Islamic renewal party IFS had significant support, especially in the Fergana Valley. When violent riots broke out in Fergana in June 1989 with more than 200 dead, IFS was held responsible and banned.

In an all-Soviet referendum in March 1991, more than 90 percent of the population of Uzbekistan voted for the Soviet Union to exist as a common state. However, after the failed coup in Moscow, Uzbekistan was proclaimed an independent state, August 31, 1991. The country became a member of the Commonwealth of Independent States (USSR) on December 21 of the same year. Independence was confirmed in a referendum on December 29, with 98 percent support. At the same time, Islam Karimov was elected president of the new state.

The Communist Party changed its name to the Uzbek Democratic People’s Party and retained all positions of power. A number of opposition members have since been arrested, accused of attempted coups. Opponents of the regime were also kidnapped abroad and brought home for questioning and imprisonment.