Findings suggest that Vanuatu was populated from western Melanesia around 1300 BC. by people belonging to the so-called Lapita culture. Between about 600 BC and 500 AD appeared a distinctive carved and relief decorated pottery called mangaasi.

About 1300 AD Significant social stratification took place in central Vanuatu in connection with the introduction of a distinct Polynesian culture, materially exemplified by bone needles, seashell implements, pig-toothed beads, and coral conglomerate buildings. The most important find from this time is the tomb of Chief Roy Mata on the island of Retoka off the island of Efaté, which contained the skeleton of more than 30 sacrificed men and women. The investigation of the burial ground has largely confirmed the surviving oral traditions of Roy Mata’s funeral. 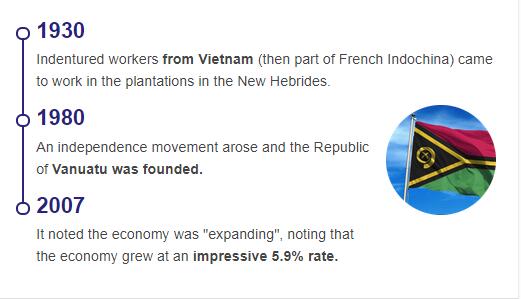 The first European to join the archipelago was the Portuguese Pedro de Quirós in 1606. The Frenchman Louis Antoine de Bougainville arrived in 1768, and the British James Cook gave the island group the New Hebrides in 1774 and mapped the region. At the beginning of the 19th century came rival French and British missionaries, traders and whalers. Mission, “blackbirding” (forced recruitment of young men) and sandalwood predation led to tensions between Britain and France, and only in 1906 did they adopt a solution that led to a joint colonial rule (condominium) in the New Hebrides. To see more information other than history, please visit Abbreviationfinder to learn more about climate, population, government, and economy for the country of Vanuatu.

During World War II, the Allied powers established one of their regional bases in the area to prevent the Japanese advance, and the Japanese never entered the New Hebrides. After the war, conflicts arose between the Melanesians and the colonial powers over land ownership. These struggles were the beginning of an independence movement and the formation of Melanesian political parties. However, independence came late, and decolonization was complicated.

In 1980, the French-speaking Na-Griamel Party tried to force a separate independence for the Espírito Santo Islands under the name The Independent State of Vemerana, but the colonial powers sent troops and wounded the separatists. When these troops were later replaced by Papua New Guinea military later that year, the colony was given the full name of Vanuatu independence within the Commonwealth. Politically, the country is characterized by personal rivalry, which has led to repeated vote of confidence in Parliament and a host of changes by the Prime Minister. However, it is unusual for the contradictions to lead to violence.

History of Vanuatu
Tagged on: Vanuatu