Hard-to-find traces of paleolithic hunters have been found, as have rock paintings. From the end of the third millennium BC derives the oldest known remains of permanent villages and more advanced agriculture. Already at this time it was probably started to build distribution ponds for rainwater to use for irrigation.

From about 800 BC there are inscriptions in Sabaic with information about the kingdom of Saba rulers and cult officials. Sometime between 680 and 500 BC King Karibil Watar of Saba, who from Sirwah and Marib conquered the kingdoms of al-Djawf in the north and Awsan in the south-east. From the same time, remains of a large dam in Marib, probably erected on older predecessors, and of large temples in Marib and Sirwah, for example. 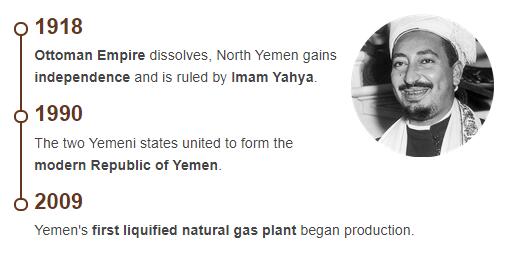 Yemen until the 19th century

In Greek sources from about 300 BC four kingdoms in southern Arabia are mentioned: Main, Saba, Qataban and Hadramawt. A basic prerequisite for these state formation was the lucrative trade in incense. About 115 BC established himyarsa new kingdom around the city of Zafar in Qataban. A Roman Expedition to Yemen 24 BC may have contributed to the kingdoms of Saba, Himyar and Main being united under a Sabaean king, Dhamaraly Bayyin Yuhanim, who ruled around the beginning of our era. At the same time, the political center of gravity was shifted to Yemen’s western mountain country. A century later, Himyar became independent again. The next power struggle in the region first culminated around 270 AD with the himyaric king Shammar Yuharish conquering both Saba and Hadramawt and uniting all of southern Arabia. To see more information other than history, please visit Abbreviationfinder to learn more about climate, population, government, and economy for the country of Yemen.

In the beginning of the 400s, the Himyar empire gained influence far into western and central Arabia under the legendary ruler Asad Kamil. At this time, both Jewish and Christian influence increased, and around 520 AD. King Yusuf dhu Nuwas transitioned to Judaism. A massacre of Christians in Nadjran led 525 to the intervention of the Christian kingdom of Aksum in Ethiopia. The domestic dynasty was overthrown, and an Ethiopian general, Abraha, ruled as king of Himyar until about 560 AD. The Christian empire in southern Arabia was overthrown by about 575 of the Sasanids in Iran, and the entire region was made into a Sasanid province.

In 628 the Sasanian governor of Sana converted to Islam. The country then obeyed the Umayyad and Abbasid governors until the mid-800s, when local rulers became virtually independent. The country now disintegrated into regions under local dynasties: the coastal plain, the northern and southern mountain lands, and the Hadramawt.

In 897 Yahya al-Hadi ila al-Haqq established the Zaydite imamate in Sada, which came to exist until 1962 (see Zaydites). In the Hadramawt, Islamic Orthodoxy was introduced in the 8th century through the mission of Northern Arabs, who established themselves as local aristocracy alongside the traditional. In 1173, southern Arabia except Hadramawt and the Sada area was conquered by the Egyptian Ayyubids. This laid the foundation for a stable state formation on the coastal plain and in the southern mountainous country with the capital of Taizz. It was taken over by the Rasulidian dynasty.

In 1517, the country was occupied by Egyptian Mamluk, and in 1538 the first Ottoman army arrived in Yemen and occupied the ancient territory of the Rasulids (see Ottoman Empire). Around 1600, the Zaydite imam al-Qasim al-Mansur bi-llah launched a counter-attack against the Ottomans, who were driven out in 1635. For 200 years, the country was ruled by the Imams, whose empire, however, gradually diminished from the end of the 1600s. During this time, Yemen became the world’s leading exporter of coffee. However, this economic heyday ended in the 18th century, when Dutch and French began to grow coffee in their own colonies.

The conquest of the Wahhabites in Arabia and Egypt’s expansion into the Red Sea region in the 1830s led to the British occupation of Aden in 1839. After the opening of the Suez Canal in 1869, the Aden became of central strategic importance to Britain. The Aden area was ruled from British India, while the areas east of Aden including Hadramawt became a British sphere of interest, regulated by a series of treaties with local rulers on protection, the so-called Aden Protectorate. This in turn led to the Turks returning to Yemen as early as 1849, and in 1872 they established a Yemeni province, comprising the latter North Yemen. The division of the land was a fact.

The Turks never succeeded in pacifying North Yemen, where the resistance was led by the Imams. Imam Yahya (ruled 1904-48) gradually took control of most of northern Yemen. A treaty in 1911 preserved an illusory Turkish supremacy, which finally ceased in 1918. Yahya pursued an expansive policy and raised demands on the provinces of Asir and Najran. After a brief war with Saudi Arabia, the Imam in the Taif Treaty in 1934 was forced to relinquish the demands. Yahya pursued an extremely isolationist policy, and North Yemen emerged increasingly as a medieval relic, in stark contrast to the British-controlled Aden, which had grown into one of the world’s busiest ports and became the British crown colony in 1937.

Yahya was assassinated in 1948 in an assault led by a group of officers. Yahya’s son Ahmad (reigned 1948-62) took power and quelled the opposition. He moderated somewhat the father’s isolationist policy and initiated a cautious modernization. His rule, however, was characterized by despotism and increasingly manic suspicion against all political opposition. A coup attempt in 1955 was brutally defeated. Ahmad allowed Yemen to join the Nazi United Arab Republic in 1958, which was thus extended to the United Arab States (1958-61). When Ahmad died in 1962, the successor was overthrown after a week by an officer group, which proclaimed republic.

History of Yemen
Tagged on: Yemen