Malta’s history is characterized by the fact that the archipelago has been subject to foreign rule for centuries. Malta was populated around 5000 BCE. Around the year 1000 BCE the archipelago came under the Phoenicians, then during the great powers in the area: Carthage in 400 BCE, the Roman Empire in 218 BCE, the Vandals in 454 AD, the East Goths in 494, the Byzantines in 534, the Arabs in 869 and the Normans in 1090. The Maltese Order established itself on Malta in 1530. The archipelago was conquered by Napoleon Bonaparte in 1798, before it became a British colony from 1814. 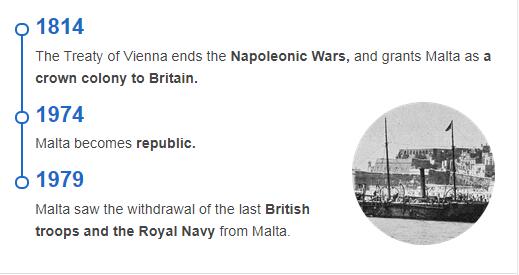 Malta has had a settlement since about 5000 BCE. and is rich in megalithic monuments from the younger Stone Age (3rd millennium BCE).

About 3000 BCE the archipelago was the center of the megalithic culture in the Mediterranean; on Gozo are some of the oldest stone temples that feels. The Phoenicians subdued the islands about 1000 BCE, and they were later subjugated to Carthage.

In 218 BCE. Malta became a Roman colony. To see more information other than history, please visit Abbreviationfinder to learn more about climate, population, government, and economy for the country of Malta. Paul suffered shipwreck there for about 60 years and according to tradition the people there became Christian during his stay. Malta was conquered by the Vandals in 454, the East Goths in 494, the Byzantines in 534 and the Arabs in 869. The Normans incorporated the islands of southern Italy and Sicily in 1090 as part of the kingdom they founded, called the Two Sicilies.

The German-Roman emperor Karl 5 gave Malta in 1530 to the Order of Johannite (from now on the Order of the Maltese), which erected many churches, monasteries, palaces and fortresses. Grand Master Jean Parisot de la Vallette rejected a long-standing Turkish siege in 1565.

Napoleon conquered Malta in 1798. The Maltese rebelled, and with British help they chased away the French in 1800. Malta became the British crown colony in 1814 and one of the empire’s most important naval bases. This became the main source of income for the Maltese.

Malta had limited internal self-government in the period 1921-1936. At the intersection of the Gibraltar-Egypt and Italy-Libya interconnections, Malta gained more strategic importance during World War II than ever and was subjected to numerous air strikes.

The constitution of 1947 introduced self-government. A referendum in 1956 resulted in a large majority for integration with the UK, but negotiations later collapsed on the issue of financial guarantees, and the governor took over the board.

A new constitution of 1961 gave Malta extensive autonomy. In the 1962 election, the Nationalist Party prevailed, and its leader, Giorgio Borg Olivier, became prime minister. Full independence was achieved in 1964. The UK was to provide financial support and British troops remained in Malta for ten years.

The time after independence

Since independence in 1964, politics has been characterized by two fairly equal parties, the Labor Party MLP and the Christian Democratic Nationalist Party PN. In 1971, Dominic Mintoff formed a workers’ party government, and eventually developed a policy based on cooperation with the Soviet Union and its allies in the Eastern Bloc. In 1972, Mintoff signed an agreement with the British to lease military bases until 1979; this meant tripling the revenue from the bases.

The Republic was introduced in 1974, but Malta continued as a member of the British Commonwealth.

Foreign policy had a break in Malta’s previous good relations with Libya in 1980, in the question of rights to oil drilling in the Mediterranean. Nevertheless, in 1984 and 1985, the two countries entered into agreements on cooperation and a common labor market. Malta’s neutral and alliance-free position was constitutionally established in 1987.

National Party came to power in elections in 1987 and also went victorious from elections in 1992. While the National Party were in power until 1997 oriented Malta itself foreign policy more in the direction of the US and the Western countries, while the economy was liberalized. From 1987 economic policy was changed in a market-oriented direction. The government facilitated tourism and finance and established a free port and an “offshore” business center. The welfare measures are well developed and provided by both the state and the Catholic Church.

In 1995, the country entered into a Partnership for Peace Agreement with NATO. As early as 1990, Malta applied for EU membership, and was the smallest of the ten new countries to join the EU in 2004. Malta was the first of the new member countries to hold a referendum before EU membership. The yes majority of just over 56 percent was the lowest among the new member states, but in turn the turnout on the island was over 90 percent. Alfred Sant and the Labor Party MLP were skeptical of EU membership, but the Nationalist Party PN were supporters. Prime Minister and yes leader Eddie Fenech Adami and PN won a solid victory in the 2003 elections.

In 2013, Joseph Muscat of MLP was elected prime minister, and Marie Louise Preca, also represented by MLP, took over as the country’s 9th president in April 2014.

History of Malta
Tagged on: Malta