Scattered paleolithic surface finds from eg. the acheulé has been found. The famous so-called Apollo 11 cave in southern Namibia has a long sequence of machined core implements, covered by a bearing dated to about 10,000 BC. The cave’s paintings of four-footed animals, some of which may be more than 28,000 years old, constitute the oldest known cave art in sub-Saharan Africa.

In the Brandberg area in the north, hundreds of later prehistoric collections and rock paintings have been found. From the time of Kr.f. nomadic livestock management and trade in copper objects were focused on the Namib Desert area. Iron was used in agricultural communities in the north even before 1000 AD.

Various groups of san and khoikhoi (especially nama) have lived in Namibia for thousands of years. To see more information other than history, please visit Abbreviationfinder to learn more about climate, population, government, and economy for the country of Namibia. Around 1800, a group of African-speaking khoikhoi, mixed with whites in the Cape Colony (formerly called Orlam), moved and founded their own kingdom in southern Namibia. In the early 1800s, white traders also came from the south, especially to northern Namibia, and exchanged ivory and cattle for arms. The Bantu people of the Herero had begun to settle in Namibia from about 1600. Like the Khoisan, they were herdsmen, and disputes over pastures often occurred between the Herero and the Nama and Orlam. In 1870, however, a settlement between herero and orlam was concluded. 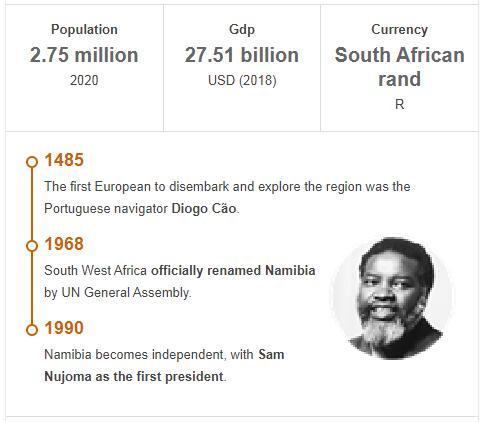 In the early 1800s, British missionaries began to work in Namibia. They were followed around 1840 by German missionaries, who gained a great influence and prepared the ground for German colonization. The rich Northern Namibia was entrusted with a Finnish mission. In the 1880s, Adolf Lüderitz acquired the first German area on the southern coast. It became a German protection area in 1884, called German South West Africa, and soon expanded to the whole of present-day Namibia. However, the largest port, Walvis Bay, had been occupied by the British as early as the 1870s; it passed into the Cape Colony’s possession in 1884 and was returned to Namibia in 1994 by South Africa. Ambofolken(also called ovambo) in the north was hard pressed between Portuguese and German colonialism. Germany, despite fierce opposition, succeeded in capturing the territory of the ambo people in the border regions between Angola and South West Africa.

German rule was hard-fought, and immigration of German colonists threatened the living conditions of the indigenous peoples. A series of rebellions followed, by orlam in the 1890s, by herero, nama with several 1904–05. The uprising was answered by Germany through military campaigns against both civilians and insurgents, which greatly decimated the number of people groups. It has been designated as the first genocide of the 20th century.

During World War I, South African troops entered Namibia, and after the war, South Africa gained the country as a mandate. After the Second World War, South Africa refused to recognize the UN’s right to rule over the area and took steps to fully adapt it to the apartheid system. In 1966, the UN General Assembly declared that South Africa had forfeited its mandate and highlighted the country’s right to independence by naming it Namibia (after namib, ‘shield’, ‘the narrow dry coastal strip’). A council was appointed as an administrative body, but without any means of power.

The Namibian resistance was first organized in 1957 among migrant workers from Ovamboland in the north, then in a nationwide organization, the South West Africa People’s Organization (SWAPO), 1960. When the International Court of Justice in The Hague in 1971 declared South Africa’s occupation illegal, but no sanctions followed, SWAPO began armed struggle. It was first brought from Zambia and then from Angola, after independence in 1975 under the patronage of the MPLA government. South Africa concentrated large troops on northern Namibia and attacked both SWAPO and Angolan government troops. South Africa’s attack on the Kassinga refugee camp in southern Angola in 1978 killed over 1,000 Namibian refugees.

Under pressure from the United States, in 1988, an agreement was reached on the simultaneous withdrawal of the South African troops from Namibia and the Cuban forces assisting the Government of Angola. As the last African colony, Namibia became independent on March 21, 1990, with SWAPO leader Sam Nujoma as president. Cooperation with South Africa has been good since 1994, and in 1996 all Namibia’s debts to South Africa were written off.

SWAPO, which is now the party’s official name because the concept of South West Africa is considered obsolete, has retained and strengthened its grip on power. The party has won all elections since independence by a large margin and the country has been described as a one-party democracy. Although the constitution only allows the president to sit for two terms, Nujoma was in office for a third term in 1999, arguing that he took office for the first time before the country became independent. This contributed to the criticism of power imperfections directed at SWAPO.

In the 2004 election, however, Nujoma abstained from running for office, despite the fact that SWAPO had a sufficiently large majority in Parliament to bypass the constitution. He was succeeded by Hifikepunye Pohamba, who was elected new president with 76 percent of the vote; In 2009, Pohamba was re-elected with the same strong support. However, SWAPO is characterized by internal strife, and in the 2009 election, Rally for Democracy and Progress (RDP), formed by an outbreak of SWAPO, became the largest opposition party.

The split did not affect the support for SWAPO. In the 2014 election, the party won a landslide victory and received 80 percent of the vote to the National Assembly. The presidential candidate, Hage Geingob, received 87 percent, which is the biggest victory margin to date. The RDP received much reduced support and instead the Democratic Turnhalle Alliance (DTA) again became the largest opposition party with just under 5 percent of the vote. Before the 2019 elections, DTA changed its name to Popular Democratic Movement (PDM) and increased its support to 17 percent of the vote. SWAPO again became by far the largest party, but the election result (65.5 percent) meant that the qualified majority was lost. Geingob was re-elected but lost more than 30 percentage points compared to the 2014 election to 56 percent of the vote.

The opposition and human rights groups have demanded some form of the Truth and Reconciliation Commission to investigate possible abuses during the freedom struggle, so far without hearing from SWAPO. The issue was re-raised in 2006 and 2009 when several mass graves from this time were found in the northern part of the country.

In 1998, Namibia, like Zimbabwe and Angola, sent troops to Congo (Kinshasa) to support President Laurent Kabila in the fight against rebels. The approximately 2,000 Namibian soldiers were taken home in 2001.

In 1999, fighting erupted in the deprived region of the Caprivi Strip in the northeastern corner of the country, where a separatist movement demanded independence. During the judicial aftermath, which has dragged on over time, the regime has been accused of subjecting the accused to abuse and torture. Ten people were sentenced to long prison terms for high treason in 2007. In February 2013, 43 were acquitted of just over 100 people who were also accused of, among other things, high treason. In 2019, Botswana began deporting Namibian refugees who refused to return to the Caprivi Strip for fear of being persecuted.

During the War of Independence, SWAPO promised land reform. The land distribution law was first founded on the principle of willing seller – willing buyer. In 2002, the government declared the land issue a top priority and expressed its support for Robert Mugabe’s Africanization policy in Zimbabwe. White farmers own about half of the cultivated land in Namibia and three-quarters of commercial agriculture. In 2003, black farmers’ plans to occupy large farms owned by whites were blunted. The following year, the government decided that land could be expropriated, but issued legitimate compensation.

Another infected issue is Germany’s responsibility for the genocide of the Herero people in the early 1900s. Herero has claimed damages, but Germany refuses to pay any of this, partly with reference to the extensive assistance provided by Namibia.

History of Namibia
Tagged on: Namibia